Intercepted email: Democratic officials in the 5th District of N.C. have drafted a letter address to Speaker of the House Nancy Pelosi, urging disciplinary action against Congresswoman Virginia A. Foxx for her activities last Wednesday. This is part of the letter: 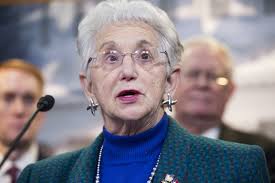 Ms. Foxx has claimed to object “out of an abiding respect for the Constitution” in reflection of supposed “violations of Article II, Section I of the Constitution” in which there is no stated direction as to how the states’ manage their election process regarding Presidential electors.  The reality is that the Republican Members’ publicly stated goal in raising multiple objections to states’ electors certification was to overturn the election in favor of the defeated President Trump. This action goes against the intent of the Electoral Count Act of 1887, which sought to minimize Congressional involvement in election disputes. This grossly un-democratic attempt to subvert the will of the people reflects a violation of her duty as called to in the Amendment XIV of the Constitution, Section 3:

“No person shall be a Senator or Representative in Congress, or elector of President and Vice President, or hold any office, civil or military, under the United States, or under any State, who, having previously taken an oath, as a member of Congress, or as an officer of the United States, or as a member of any State legislature, or as an executive or judicial officer of any State, to support the Constitution of the United States,shall have engaged in insurrection or rebellion against the same, or given aid or comfort to the enemies thereof. But Congress may by a vote of two-thirds of each House, remove such disability.”

As constituents of Ms. Foxx, we want to be very clear that we do not feel adequately represented by an individual who would publicly stand with insurrectionists. We want to make clear that this is not done in hopes to undermine the recent election that Rep. Foxx fairly won despite many similar election process changes in our great state of North Carolina that were done in Pennsylvania. The sheer hypocrisy in challenging the results of Pennsylvania, where Biden won, but not North Carolina, where Trump was victorious, is obvious in their ultimate intentions: disregarding the will of the majority of Americans as reflected in the Electoral College totals. We recognize that due to targeted gerrymandering by the NCGOP-lead NC General Assembly any replacement for Ms. Foxx in the Fifth District would come from special election that a Republican candidate is favored to win.

Posted by J.W. Williamson at 1/12/2021 08:38:00 AM
Email ThisBlogThis!Share to TwitterShare to FacebookShare to Pinterest
Labels: Donald Trump, Virginia Foxx