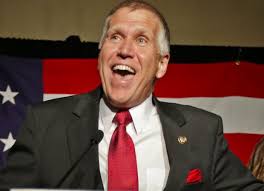 In an online lunchtime chat with the John Locke Foundation's Donna Martinez that was streamed live yesterday, Senator Thom Tillis claimed that he had not read the five paragraphs in the House's impeachment article against Donald Trump.Asked whether he'd vote to convict the president, Tillis -- an overcooked noodle, sliding off the spoon -- wouldn't answer yes or no.
Tillis said there are "a lot of questions that I’m still getting legal advice on."

Tillis also questioned the ramifications of a potential second vote in the Senate to bar Trump from holding elected office in the future. Tillis noted that, while conviction requires a two-thirds majority in the Senate, a subsequent vote to bar him from running again would require only a majority vote.

“I’ve got to wrap my head around that," he said.
Anything as mushy as that Tillis noggin ought to be pretty easy to warp into any shape you want.
Hattip: Travis Fain.
Posted by J.W. Williamson at 1/19/2021 10:06:00 AM
Email ThisBlogThis!Share to TwitterShare to FacebookShare to Pinterest
Labels: Donald Trump, Thom Tillis

A better title to the Tillis post. Hee Haaways does that.