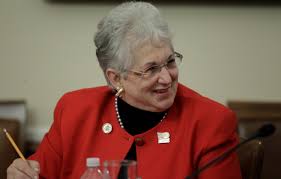 Representative Virginia Foxx straddled, an awkward position for a supposedly dignified 70-something congresswoman to take.

The congresswoman wants to have it both ways. But we feel sure she'll be soliciting those presidential autographs from Joe Biden.

Posted by J.W. Williamson at 1/07/2021 09:27:00 AM
Email ThisBlogThis!Share to TwitterShare to FacebookShare to Pinterest
Labels: Virginia Foxx

Well, she’s got to represent her constituents. And though we are also part of that group, we’re obviously not in the majority, which means that we are surrounded by people in our everyday lives who believe what happened in the Capitol build yesterday was not only okay, but their destiny. This is what I’m grappling with today. These people are my neighbors. How am I supposed to talk to them?

Autograph? She usually goes in for a kiss after the State of the Union address.