Merrick Garland, to be Attorney General of the United States 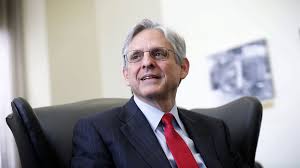 Garland, 68 -- most famous probably for being the Supreme Court nominee who never got a hearing, an early casualty of Trump-style bullying and a pelt on McConnell's shield.

Garland first worked at the justice department in 1979 as an assistant to Attorney General Benjamin Civiletti. He later became a federal prosecutor and in the Clinton administration served as a senior Justice Department official. Clinton appointed him to the D.C. bench of the US Court of Appeals.

He knows violent white supremacists. He played a leading role in the investigation and prosecution of Timothy McVeigh and Terry Nichols for the Oklahoma City bombing. His grandparents, Russian Jews, fled the Tsar's pogroms in the early 20th century. Garland was raised in conservative Judaism where he learned caring and protection for the weak. In 1983, as a lawyer in private practice, he won the case in the Supreme Court which mandated seat belts in all autos.

He looks too moderate for some progressives, but he looks foursquare to me. Nina Totenberg described him as "a moderate liberal, with a definite pro-prosecution bent in criminal cases." For post-Trump, that sounds promising. SCOTUSblog: "Judge Garland's record demonstrates that he is essentially the model, neutral judge. He is acknowledged by all to be brilliant. His opinions avoid unnecessary, sweeping pronouncements." Garland has a reputation for collegiality, and according to Wikipedia, his opinions rarely draw a dissent. "Some Biden advisers have come to view him as well-suited to restore norms of nonpolitical decision-making at the Justice Department" (WashPost).

Lisa Monaco, for the No. 2 position of Deputy Attorney General 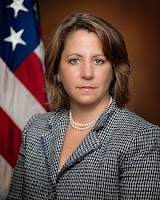 She, too, is a department veteran. She served as the Assistant Attorney General for National Security from 2011 to 2013 and as the Principal Deputy Assistant Attorney General. Before that she worked as a prosecutor, then served as a senior adviser to Robert Mueller when he was FBI director. She also served in the Obama White House as the chief counterterrorism advisor to the president.

She worked as a research coordinator for the Senate Committee on the Judiciary from 1992 to 1994 under then chairman Joe Biden, where she especially worked on the Violence Against Women Act. As a member of the Justice Department's Enron Task Force, she led the trial team in the prosecution of five former Enron executives. (Corporate corruption has got to be a target-rich area after four years of Trump.)

For the Russian interference she's well equipped. She was President Obama's chief cybersecurity advisor and drove the policy decision to create the Cyber Threat Intelligence Integration Center under the Office of the Director of National Intelligence in 2015.

Vanita Gupta, for the No. 3 position of Associate Attorney General 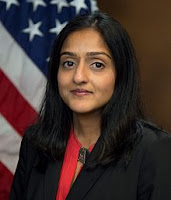 Wikipedia: President and Chief Executive Officer of the Leadership Conference on Civil and Human Rights. Previously the Principal Deputy Assistant Attorney General and appointed to head of the Civil Rights Division at the Department of Justice by Barack Obama, a position she held until January 20, 2017 (ahem).

Before all of that, she was a civil rights lawyer and the Deputy Legal Director of the American Civil Liberties Union, where she oversaw its national criminal justice reform efforts. She also served as assistant counsel at the NAACP Legal Defense and Educational Fund. Throughout her career, she has drawn support from a wide range of liberal and conservative activists, as well as law enforcement leaders, for building collaborative support and finding common ground on policing and criminal justice reform.

I happen to know something about Gupta's very first case as a young lawyer working for the NAACP, because it involved people of color just 25 miles from where I grew up in the Texas Panhandle. She defended some 40 African Americans and six white or Latino people who were romantic partners of African Americans in Tulia, Tex., seat of Swisher County and a little town well known to me because it had a public swimming pool. The 40 Tulia defendants had been convicted by all-white juries on drug dealing charges. In almost every case, the only evidence was the testimony of an undercover agent, Tom Coleman. Coleman did not use wiretaps or marked money, and records showed that he had "filed shoddy reports." He had previous misdemeanor charges for stealing gasoline from a county pump and "abuse of official capacity." Gupta won the release of her clients in 2003, four years after they were jailed, then negotiated a $6 million settlement for those arrested.

Gupta's previous tenure at the Department of Justice was marked by several high profile matters that included the investigations of the Ferguson, Baltimore, and Chicago police departments; the appeals of the Texas and North Carolina voter ID cases; the challenge to North Carolina’s HB2 law and other LGBTQ rights litigation; enforcement of education, land use, hate crimes, and other statutes to combat Islamophobia and other forms of religious discrimination; etc.

Kristen Clarke, to be Assistant Attorney General for Civil Rights

Clarke's parents immigrated to Brooklyn from Jamaica. She got her B.A. from Harvard and her law degree from Columbia. After graduating from law school she joined the Department of Justice as a prosecutor and a trial lawyer on voting rights, hate crimes, and human trafficking cases. She won a landmark decision in the D.C. Circuit that found hateful on-line trolling a compensible tort.