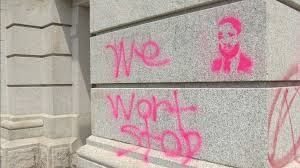 You know what else was going on in this nation on Wednesday? The winter meeting of the Republican National Committee, at an expensive venue on Amelia Island, Florida. (I'm told a mere jigger of good Kentucky whiskey cost $24.) And do you know what Donald J. Trump was doing Thursday morning? He was all rah-rah-team on a speakerphone direct to the winter session attendees and also in a later canned video. Curiously, the events of the day before no longer existed anywhere in the universe. Poof. No national emergency, no potential public embarrassment for politicians who condoned the mob. During the breakfast session on Thursday morning, Trump complained about the media and never once mentioned the storming of the Capitol.

Trump also sent along to the winter meeting a 2-minute video of himself standing in the White House colonnade. He bragged about the popularity of the party, about his 74 million votes, about women (of all things) who won seats in the House, and about the expedited coronavirus vaccine. Again, he did not mention the insurrection meant to keep him in the White House.

In other words, Jesus! Not only did Trump lie by omission, like Land O Lakes wouldn't melt in his mouth, but he also displayed his total lack of interest in self-examination. His crippling ineptitude with self-awareness is the hallmark of this very stable genius. He seemed not to know yesterday what he now looks like. He doesn't understand that many of the delegates attending the winter meeting were already secretly disgusted with him, some of them beginning to speculate on whether the Trump blessing in 2020 might be a liability or no advantage for a candidate.

Self-examination? That video speech "to the nation" yesterday evening, which Trump let his daughter Ivanka talk him into, included these words:

"America is and must always be a nation of law and order. The demonstrators who infiltrated the Capitol have defiled the seat of American democracy. To those who engaged in the acts of violence and destruction, you do not represent our country. And to those who broke the law, you will pay."

This is what we get from a president who can't see himself and for whom none of what he said is true -- its insincerity underlined by his monotone while reading it.

Here's the political question: Just how much of what's left of the GOP can actually see itself any clearer than Trump sees himself? Does the wider GOP, not just the Party brass on Amelia Island, see that its brand has become so hated by voters that the Party is forced to suppress the vote of those who hate them in order to win elections -- imposing hurtles like photo I.D., doing purges of voter rolls, moving precincts and limiting access to early voting, drawing maps that divide and conquer?

Maybe in states of the former Confederacy, where Trumpism is strongest -- like North Carolina -- the adherence to Trump's big lie may hang on longer than in the Midwest and the industrial North. (Incidentally, I operate with this definition: belief in Trump's lies plus a proclivity for bullying equals "Trumpism.") I hear that the braggadocio of the Capitol stormers sprouts today on social media, with more and more of the guys (and a few of the gals) posting selfies of their brave deeds taken while trashing the Capitol. They clearly think they're totally in the clear and unaccountable. Because they're white.

Is that the Republican Party of 2022?

It's worth noting that at the winter meeting in Florida, the crowd of GOP leaders "had a lackluster response" when former U.N. ambassador Nikki Haley criticized Trump. “He was badly wrong with his words yesterday,” Haley said. “And it wasn’t just his words. His actions since Election Day will be judged harshly by history.” Judged harshly by history -- who he? -- but not necessarily openly dissed by the GOP's top officials. The all-in Trumpist cheerleader, National Chair Ronna McDaniel, has been endorsed by Trump for another term, which she ardently desires, and she therefore has no rivals to head the Party for another two years.

It will be interesting to see if the internecine warfare breaking out in some Republican circles will impact the Republican party and its future chances in North Carolina.

I will continue to look to you for behind the scenes reporting. Thanks!

Thanks for this J.W. The future of the GOP will occupy a lot of concern over the next couple of years.
Virginia may find herself mortally weakened by her support for sedition as these fissures continue to be revealed, just as Kevin McCarthy and Steve Scalise may be about to draw a short stick.
See this Politico story:
https://www.washingtonpost.com/politics/trump-call-georgia-investigator/2021/01/09/7a55c7fa-51cf-11eb-83e3-322644d82356_story.html