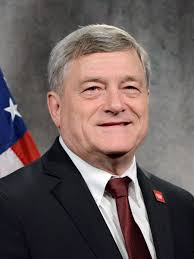 Steven Dillingham, director of the U.S. Census Bureau, announced his resignation yesterday in the wake of allegations that he had supported a partisan push to deliver data on undocumented immigrants to President Trump before the president leaves office.Reports last week from bureau whistleblowers said political appointees were pressuring staff members to release state tallies of undocumented immigrants by Jan. 15, regardless of their accuracy, to boost Trump’s effort to exclude them from congressional apportionment. Those reports prompted calls from civil rights groups and Democratic lawmakers for Dillingham to resign.
Dillingham was appointed director two years ago as the bureau was embroiled in lawsuits over the Trump administration’s push to add a question about citizenship to the 2020 Census, an effort that was ultimately blocked by the Supreme Court. His appointment had been set to last until the end of 2021.
Posted by J.W. Williamson at 1/19/2021 09:02:00 AM
Email ThisBlogThis!Share to TwitterShare to FacebookShare to Pinterest
Labels: Donald Trump, Steven Dillingham