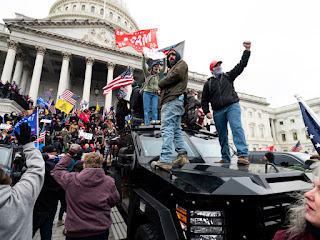 What happened yesterday at the Capitol is the culmination of Trump's morally defective presidency. His supporters who stormed and ransacked the building believed his lies and became complicit in his attempt at a coup.

Trump stoked his ego by causing thousands to break the law for his sake and in his name. He must have reveled in the scene, until the scene became too stomach-churning even for him -- if it ever did.

“Statistically impossible to have lost the 2020 Election,” Trump lied in a tweet on December 20. “Big protest in DC on January 6th. Be there, will be wild!” They showed up by the thousands for a rally on The Ellipse, as did Trump, who urged them repeatedly to march on the Capitol. He even said he'd be marching with them. He didn't. He retreated to the warmth and safety of the White House while an insurrection unfolded on Capitol Hill.
Liz Cheney: "We just had a violent mob assault the US capitol ... No question the President formed the mob, the President incited the mob, the President addressed the mob. He lit the flame."

He should be removed from office now, forcefully, not in two weeks, and that could happen if Vice President Pence and members of the Cabinet invoked the 25th Amendment. They won't. They remain as morally vacant and complicit as always, though many of them are now tut-tutting. "Thoughts and prayers!"
Posted by J.W. Williamson at 1/07/2021 09:15:00 AM
Email ThisBlogThis!Share to TwitterShare to FacebookShare to Pinterest
Labels: Donald Trump, Trumpism