Biden Boldness Is the Way

Having fallen in line behind Trump, and having opposed Obama in near-unanimous fashion, do [Congressional Republicans] now feel any responsibility to help create a new political climate? 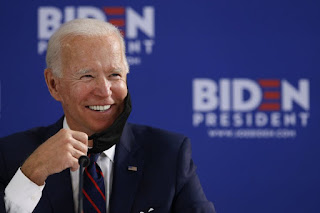 The answer to your question, Dan, is no. A thousand times no. Or at least 261 times, the current number of Republicans in both houses of Congress. Despite a double national crisis -- an increasingly virulent virus and the loss of so many jobs -- key Republicans have already raised their voices in the face of any available camera that President Biden's COVID relief package is dead on arrival. That's how it's going to be. Republicans are reverting to what they do best -- kick the dog and block every door to the kitchin.
Bless their hearts. Yes, their inherited genes demand "no" for an answer. Add to that genetic predisposition toward pain and obstruction the terrors of The Purge now -- the lingering (and fulminating?) power of Trump to impose obedience and punish deviation. Like in Arizona, where the Trump-endorsed state GOP Chair Kelli Ward led a censure vote against prominent state Republicans Jeff Flake and Cindy McCain and also censured their sitting Republican Gov. Doug Ducey. His great sin? He riled up the Trumpists by imposing emergency COVID rules. (And that, O my brethren, is just how pathetic the political divide has become under Trump.)
Trumpists wanted a civil war. Looks like they're getting it on the rebound:

In recent weeks, Trump has entertained the idea of creating a third party, called the Patriot Party, and instructed his aides to prepare election challenges to lawmakers who crossed him in the final weeks in office, including Rep. Liz Cheney (R-Wyo.), Georgia Gov. Brian Kemp (R), Sen. Lisa Murkowski (R-Alaska) and Rep. Tom Rice (R-S.C.), according to people familiar with the plans.

Multiple people in Trump’s orbit, who spoke on the condition of anonymity to discuss private conversations, say Trump has told people that the third-party threat gives him leverage to prevent Republican senators from voting to convict him during the Senate impeachment trial. [Dawsey and Scherer]

Scaring those senators out of voting to uphold constitutional democracy by convicting Donald J. Trump will probably work. They won't convict the sonovabitch out of fear that The Purge will finger them too (except for maybe a few exceptions who have less to lose and a smidgin more of internal fortitude -- Mitt Romney, Richard Burr ... Mitch McConnell?).

The seismic rupture in the GOP should be good for Democrats, but as a Democrat, I know very well to expect too much thinking and not enough doing. Democrats tend to think too much, and the thought they're thinking about too much right now is "unifying the country" -- at least, so far as Congress is concerned. You can't unify that Congress. The flurry of Biden's executive orders plus his fully fledged and carefully drafted legislative packages to fix some of the current sicknesses in this country -- that was the kind of boldness I want. Given he's got only two guaranteed years of shared power in Congress, Joe Biden's got to reach for more than he grabs.

Posted by J.W. Williamson at 1/24/2021 10:23:00 AM
Email ThisBlogThis!Share to TwitterShare to FacebookShare to Pinterest
Labels: Donald Trump, Joe Biden