The Man Who Tried To Stop Trump 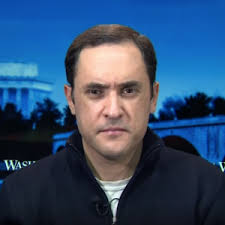 NYTimes reporter Michael Schmidt has written the best book I've read on the Trump era, or ever hope to read -- "Donald Trump v. The United States: Inside the Struggle To Stop a President." Schmidt hasn't just written a kind of political thriller based on his granular Washington reporting, coupled with amazing access to a particular White House official, White House Counsel Don McGahn. McGahn was trying to herd the wrong man who had gotten himself into the wrong place at the wrong time, a new president who was trying to wield absolute power like the monarch he was in his own mind. That's a sizzling tale in Schmidt's handling. But his book seems greater than that. It's grade A history and will live as a valuable chronicle of what we've been through as a nation. Schmidt's style -- crystalline, propulsive, clarified like the best basting butter.

He tells the tale of more than just McGahn. Other Trump administration figures also attempted to restrain Trump, like James Comey, who didn't last too long. We have to admit that those attempts to restrain Trump were largely unsuccessful-- Trump still got himself impeached and is right now plotting God knows what for this coming Wednesday. Last Saturday, Trump, with North Carolinian Mark Meadows on the line, solicited Georgia elected officials to commit electoral fraud.

But for a time -- the heart of Schmidt's book -- Don McGahn attempted to hold Trump back. He was the one top aide who could have a shouting match with Trump and keep his job. He called Trump "King Kong," and not as a complement. In McGahn's eyes, Trump became just another celebrity bimbo, susceptible to flattery and lacking a moral core. McGahn was particularly repulsed when Trump pardoned a woman because fellow celebrity Kim Kardashian made the suggestion. In the end, and because Trump's first set of defense team lawyers (John Dowd and Ty Cobb) had offered Mueller total access to White House aides -- because Trump had told them he'd done nothing wrong and they chose to believe the biggest liar in the Western Hemisphere -- McGahn covered his butt and told the Mueller team everything he thought the Mueller team was going to find out eventually anyway. Plus McGahn had come to the conclusion that Trump was setting him up to take the fall. McGahn blabbed in secret to Mueller's team for over 30 hours and just incidentally implicated Trump in criminal obstruction of justice. Whether any Federal prosecutor anywhere, even six months from now, chooses to pursue charges on that evidence is a forlorn hope. 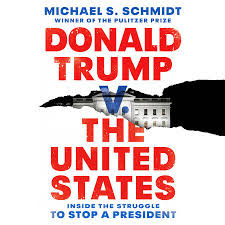 Trump has been a threat to democracy itself and essentially unstoppable (except for the intercession of the voters, a fact that Donald Trump doesn't accept and that right now he's scheming to overturn). Schmidt sums up the Trump persona better than anyone: "He was thin-skinned, but somehow impervious to things that would -- and did -- destroy more normal candidates. He couldn't take a punch, yet he could survive a beating better than anyone else."

Now this McGahn fellow ... not someone I intend to heroize. He's a libertarian, apparently a pretty notorious one. He wanted to see government regulation dismantled and the Wild Wild West restored to capitalism, and he had extracted a promise from Trump to take the job of White House Counsel: Trump had to give McGahn a free hand to select Supreme Court nominees, along with all Federal district judgeships. McGahn came up with the names and McConnell pushed them through, often over the objection ("Not Qualified") of the American Bar Association. Trump got through a staggering 230+ judicial nominees, almost all of them McGahn's personal picks.

Schmidt understands The Trump Way -- "a cascading chaos" of daily whims and petty grudges, distractions and head-scratching detours and deadends. That daily churn of novelty actually "dulls the senses" for us bystanders, and normal people with allegiance to normal values forget to be shocked.

Schmidt ends his account in the summer of 2019 with Attorney General William Barr's commandeering of the Mueller report to Trump's benefit. Schmidt's book went into production months before the November election, and it was published last August. Schmidt didn't know how the election would turn out, but he seems resigned that Trump will survive yet again. I'm prepared to say he hasn't. And I can only hope that Michael Schmidt is already prepping a volume two, to get us all the way through this aberration.

Nice to read your comments on Schmidt's book, which was buried in the media frenzy over celebrity reporter Bob Woodward's Rage published two weeks after Schmidt's book. There is such a deluge of books revealing the incompetent and corrupt essence of Trump and his administration--Michael Cohen, Mary Trump, et al--that one could forget a short book, The Fifth Risk, written by Michael Lewis in 2017 that convincingly laid bare the incompetence of the people Trump appointed to run our government. There was no way his administration could avoid a chaotic disaster.

Looking forward to your future posts on the reading list you have at hand.

Your commentary is spot-on.