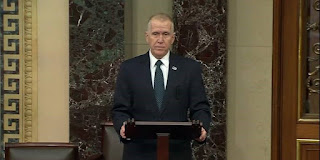 In a vote in the US Senate yesterday, on a motion by Sen. Rand Paul of Kentucky to dismiss the impeachment trial against Donald J. Trump, some 45 Republican senators made common cause with far-right insurrectionists and white supremacists and other followers of the big lie.

Senator Thom Tillis was one of them.

According to Tillis and the other 44, holding responsible the inciter of that attempted coup is nothing but politics and a "dangerous precedent."

We've seen several dangerous precedents since November 3rd, and none of them were an attempt to seek justice for the man who almost single-handedly ended our constitutional Republic.

Posted by J.W. Williamson at 1/27/2021 09:35:00 AM
Email ThisBlogThis!Share to TwitterShare to FacebookShare to Pinterest
Labels: Donald Trump, Thom Tillis