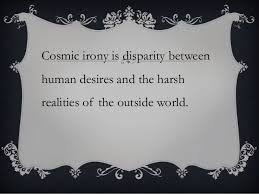 I heard Fran Lebowitz say she worries about dying in such a manner that people will laugh. It's called "cosmic irony," that force in the universe looking to embarrass you in your last minutes. Like Nelson Rockefeller, dead of a heart attack in the secret apartment of his very young mistress. Like Sir Francis Bacon, a most arrogant but scientific Elizabethan, dead of pneumonia after stuffing a chicken with snow. Like Draco of Athens, literally killed by kindness, suffocating under a pile of gifts showered on him by grateful citizens. I could go on.

Like, say you're a proper and judgmental church lady. A garbage truck with your name on it may be stalking you in the streets. People will laugh, most likely in private but still.

I don't know if Donald Trump worries. Pariahs often don't. Pariahs lack the self-reflection to recognize any ironies, let alone the cosmic variety, but he should, if he could, avoid living in such a way as to invite the flying fickle finger of fate. Self-absorption paves the road for cruel hilarity.

Say, he blunders into Melania's bedroom in the middle of the night, and she mistakes him for a Mexican rapist and puts a bullet through his heart. Say, a judgmental young woman grabs him by the privates and precipitates an exploding aneurysm in his femoral artery. Say his smartphone catches fire and he's wearing clothes fashioned out of cellulose fibers, designed and sold as a brand by Ivanka.