How Joe Biden Will Begin To Reverse Trump Policies

We expect the newly inaugurated president to sign some 15 separate executive orders this afternoon, with more promised in the next weeks.  The collective effort was characterized by Biden's aides as “undoing” and “reversing” policies implemented by Trump that were “harmful” or “inhumane.” 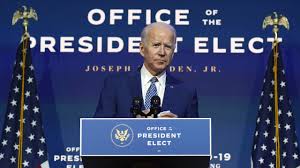 Swiftly following his swearing in, President Biden plans to sign executive actions that will require masks on all federal grounds, and he will ask agencies to extend moratoriums on evictions and on federal student loan payments. He will urge Americans to don face coverings for 100 days while reviving a global health unit in the National Security Council — allowed to go dormant during the Trump administration — to oversee pandemic preparedness and response. He will also begin to reverse steps taken by President Trump to withdraw from the World Health Organization by dispatching Anthony S. Fauci, the nation’s top infectious-disease official, to speak at the international group’s executive board meeting tomorrow. He will create a White House Covid-19 response team that will coordinate across the federal government and with states on ramping up vaccinations, distributing more masks and gloves, expanding testing capacity, reopening schools and more.

The new president will sign an order repealing the ban on travel from several majority-Muslim nations. Another order will call on the Department of Homeland Security to continue an Obama-era initiative protecting “dreamers” from deportation and issuing them work permits as long as they qualified under the requirements laid out when the program, Deferred Action for Childhood Arrivals, began in 2012. Biden will also end the national emergency over the border that Trump declared as a way to circumvent Congress when lawmakers would not grant him funding for his wall. He also promises to repeal the Trump administration’s interior immigration enforcement order that sought to withhold federal funds from cities that shielded undocumented immigrants. And he will halt construction on the border wall.
The Census
The new president will nullify the Trump administration’s directive that attempted to exclude the counting of noncitizens from the U.S. census.
Climate
President Biden plans to sign an order revoking the permit, issued by the Trump administration, that allowed for the construction of the Keystone XL pipeline, and he will sign an order to rejoin the Paris climate accord. The United States will officially be part of the 189-country climate agreement in 30 days.
Racial Equity
President Biden plans to rescind the “1776 Commission” established by the Trump administration to push a much more conservative (lily white) version of American history in public schools. That commission issued its report only this week to widespread scorn from historians because of its soft-soap on the history of American slavery. In other orders promised for coming days the president-elect has promised to root out systemic racism from our institutions, holding the federal government accountable for advancing equity for families across America.
Transgender Rights
The new president plans to revoke "in coming days" the ban on transgender people from serving in the military.
Abortion Rights
President Biden intends to reverse the so-called "global gag rule" (the "Mexico City policy") that blocks U.S. aid to organizations abroad that perform abortions or offer counseling on the procedure.
Posted by J.W. Williamson at 1/20/2021 10:11:00 AM
Email ThisBlogThis!Share to TwitterShare to FacebookShare to Pinterest
Labels: abortion rights, environmental issues, health care, immigration policy, Joe Biden, racism