The Tea Leaves Are There for Reading 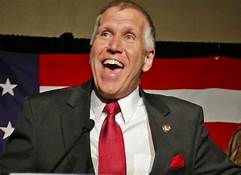 "In a closed-door [Republican] party lunch last week, veteran GOP pollster Frank Luntz advised Republican senators to not disavow the president, but to put some daylight between themselves and Trump, according to two people familiar with his presentation who spoke on the condition of anonymity to describe the private remarks. Luntz also warned that this November’s congressional results could be similar to the 2006 midterms, when Democrats wrested control of both chambers away from the GOP after President George W. Bush’s popularity fell as a result of the Iraq War and Hurricane Katrina. Luntz did not respond to a request for comment."
"Daylight." Explains why Sen. Thom Tillis has disappeared his allegiance to Trump in his TV ads. He's rather showcasing his humble roots in a trailer park. Shades of Virginia Foxx-ism!
“Republicans in the Senate might be trying to disappear Donald Trump from their campaign ads, but they can’t erase their records in Washington of enabling the White House’s attacks on health care in the middle of a pandemic or their refusal to hold the president accountable as he divides a nation in crisis,” said Stewart Boss, a spokesman for the Democratic Senatorial Campaign Committee.
Posted by J.W. Williamson at 7/09/2020 10:32:00 AM
Email ThisBlogThis!Share to TwitterShare to FacebookShare to Pinterest
Labels: 2020 Blue Wave, Donald Trump, Thom Tillis

I want to apologize for submitting a diatribe earlier which Mr. Williamson thankfully rejected.
These Tea Leaves could elicit a thick book.
So I'll focus on Frank Luntz. He is hardly a self-made man but was born into wealth and has had every educational advantage including a sponsored doctorate from Oxford. He's the son of forensic dentists Phyllys (née Kelmenson) and Lester Luntz who practiced in Hardford, CN from 1947 and authored several pivotal textbooks. We credit Luntz for the "death tax" and for "climate change" (global warming), both half-truths designed to manipulate public opinion. We would be mistaken to assume he works independently because of his focus groups and his dark money funding. He sold his polling business after a mid-life crisis, and after it was proven he withheld data and misreported results. Frank's two pet issues are advocacy for Zionist Israel and Libertarian ideology. He's 58 years old and is comfortably wealthy, living in Arlington, VA. And who wouldn't be considering his contacts here and in Europe.

Frank asserts the same proposition as Edward Bern's and Joseph Goebbels that humans decide political issues 80% by emotion and only 20% or less by intellect. He is a nihilist who does not hesitate to advocate for propaganda and misinformation. He can twist or invert any truth. And remember, Frank has unlimited help. But with the demise of Trump he has met a dilemma he cannot ameliorate.