NC House District 22 consists of Bladen and over half of Sampson County with their county seats of Elizabethtown and Clinton. It's been represented in the NC House for many terms by former Democrat now turned Republican William Brisson, who regularly stuck his thumb in Gov. Bev Perdue's eye and earned a spot on what was then called The Five Goobers in the NC House. Brisson is the last of the Goobers still serving, and he really really does need to spend more time with his family. 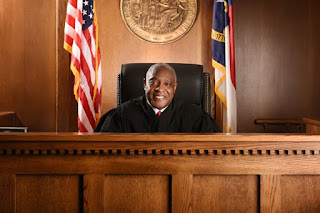 Running against Brisson this fall is Judge Albert D. Kirby Jr., who was appointed by Governor Cooper to the bench as Senior Superior Court Judge in Sampson County to finish an unexpired term but then lost the seat in the election of 2018. He had previously served two 4-year terms as a Sampson County commissioner.
Kirby attended Clinton High School, went on to college at Wake Forest University and to law school at Campbell. He served as an assistant prosecutor for district attorneys in Cumberland, Hoke, and Pitt counties before opening his own law firm in Clinton. He's also taught criminal justice at East Carolina University.
The 22nd House district is rated "Lean Republican," and the NC Free Enterprise Foundation gives it a Republican edge of only +2. Kirby had to win a primary in March against a white opponent, so one might think that his current profile is fairly high and that a general uptick in Democratic enthusiasm would -- could -- turbo-boost his candidacy. But I can't tell from his Facebook page that he's mounting an aggressive campaign. First, he has to believe that he can actually beat William Brisson and then others will believe it too and volunteer to help out.
Posted by J.W. Williamson at 7/27/2020 10:16:00 AM
Email ThisBlogThis!Share to TwitterShare to FacebookShare to Pinterest
Labels: Albert D. Kirby Jr.