Where Do We Go Now for Justice? 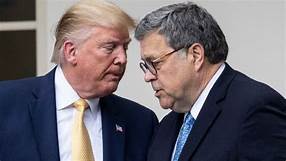 The only thing worse than a Trump is a Barr and a Trump.
If you like that combo for its boogaloo, then you go right ahead and vote for it. The majority of the rest of us won't be joining you. We actually think that our participation on November 3rd is our last chance to save the Republic. Our much touted "rule of law" has morphed -- just since Barr got confirmed as A.G. in Feb. 2019 -- into a kind of Soprano Family reality series, without the charm. Boss Donnie has an endless appetite for "a favor though" -- he often needs his henchmen sprung and there's some people who need whacking. William Barr has been there to pull the levers and make the hit.
The outrage of only last night -- the commutation of the seven felony convictions for Roger Stone (what! no outright pardon?) -- sprouted from Stone's loyal soldier act, his refusal to rat out the boss to save himself from prison. Rule of Law? No. One law for the boss and his associates, another for the rest of us.
William Barr laid the predicate for that inevitable outcome. He had overruled the sentencing recommendations for Stone made by his department's own career prosecutors -- with Boss Trump celebrating on Twitter like an Adderall-snorting Tony Montana -- which prompted four Justice Dept. career prosecutors to resign from the Stone case (one left the DOJ entirely). At Roger Stone's sentencing hearing, Judge Amy Berman Jackson said that it was pretty obvious to her that the president had been trying to subvert the rule of law by publicly attacking her, the jurors, and the Justice Department lawyers, all with the generous enablement of William Barr.
And that's really the least of it. Barr has been systematically decapitating U.S. Attorney offices in the jurisdictions currently conducting investigations of Boss Trump and his associates -- the Washington, DeeCee, office and the Southern District of New York. For Washington's US Attorney office, Barr got rid of the competent woman in charge and put in his right-hand aide Timothy Shea. The Washington office was handling both the Roger Stone and the Michael Flynn prosecutions, and Shea has been helpful there, strewing the floor with marbles.
Barr also got rid of Geoffrey Berman in the Southern District of New York. Berman was investigating hush-money payments to various goomahs not to mention the "business activities" of Boss Trump's consigliere Rudy Guiliani.
We cannot stand for this, not as a people, not as a nation, not as a citizenry that has been brought up to believe in justice.
Posted by J.W. Williamson at 7/11/2020 10:31:00 AM
Email ThisBlogThis!Share to TwitterShare to FacebookShare to Pinterest
Labels: Donald Trump, Roger Stone, William Barr

Trump has a constituency, and it's not just racists and libertarian gun toters.
Contrary to Trump's chaos, there is a well-organized phalange of wealthy privileged Americans (and allied foreigners) seeking personal advantage through DEREGULATION, financial manipulation, ruthless inconsistent foreign policy, disaster driven predation and perversion of government agencies and our body of law. With the help of Republicans in crippling the normal checks and balances Trump's operators have short circuited any hope for consistantly applied human rights. Because most Democrats vie with these new Nazis to serve wealthy interests and schemes we are demoralized.

The downside of Joe Biden is illustrative, in that he is criticized as part of Obama's "unitary executive" and before that on corporate controlled trade deals, draconian crime bills, cooperation in the Senate with racists, shady bank dealings and neoliberal wars. He's a good enough person that he equivocates but really does not deny any of this history. You can't say that Joe, even at an advanced age, is not a 100% better choice than Trump, because Trump is insane and also a career criminal. We are compelled by the hope of survival to put Joe Biden in the context of his times and to understand that his choices were often as limited as ours are in this year's presidential election , or in 2016. It's the system, Stupid.

What I was really meaning to argue from the get-go is that we can't clean up government as long as the super wealthy hold the deed to the plantation. The responsible underlings the rich depend on must take the risk of betraying their masters. You may think you have something to lose but you must also admit that all the property and advantages you have are conditional on the approval of the elites if we have lost the rule of law. And as Jerry Williamson says in his reporting on Trump and Barr, it's hanging by the last bloody sinew.

As Americans settle for Biden in a landslide we must transcend him, and mature out of our given thought patterns. By not demanding better we accept oblivion. For instance we must overcome the holy writ of market fundamentalism, which has no basis in fact. It has mired us in an unmanageable wealth and income polarization and gap which demands a tuning of private property conventions to escape. It legitimates ill gotten gains. The rich are able to pick and nominate all the candidates that suit them now, and to consequently veto our needs and preferences. Most American are slaves or near-slaves,else why would we be clambering for measly $1200 stimulus checks? Every good can be made scarce and rationed by price, including medical care and education, in a regime where consumers are powerless.

Now at the root of this malaise is a confusion about freedom. As we step back and look at racism and slavery we can see that a "free market" (as opposed to a rationally and humanely regulated commerce) is what enabled the ownership of poorer people's bodies and labor. And it wasn't just the freedumb (freedom?) of asymmetrical contracting between two parties, as terms were negotiated for the sale of one to the other. In the Antebellum South only the Corporate Victor who dominated and disciplined many commodified victims made any real money or amounted to anything. The meager farmer with one subjugated laborer was in the same fix as a boy with a mean hungry dog on a rope. Just like today only the corporate organized owner with law on his side succeeds. So my point is that a free market concept contrasts fundamentally with Constitutional protections like freedom of assembly, redress, association and speech, or with the ideals expressed in the Declaration of Human Rights (at the United Nations). A top priority in 2021
(preparing now) would be to propagate and educate the concept that free market is not a basic human right, but is usually in the interest of the propertied class. Many other unhealthy colonizations of our minds must be dispelled.