Did a Republican Primary in Colorado Open a Door for an Insurgent Democrat? 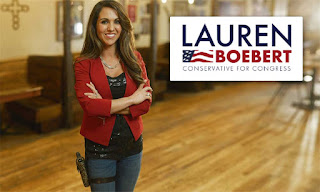 Yesterday, a gun-totin', conspiracy-theory-promotin', COVID-denying political novice named Lauren Boebert beat a five-term Republican incumbent (and suspected "moderate") named Scott Tipton in the 3rd Congressional District of Colorado. Trump had endorsed Tipton but quickly pivoted to praise Boebert for her win.
Boebert, a young 33-year-old, is the owner of Shooter's Grill in Rifle, Colorado, and if you sense an almost mythic piling up of firearm references, you wouldn't be wrong. Boebert enjoys posing with a handgun strapped to her thigh, and she reportedly encourages her wait staff to wear sidearms too. She's popular with white men. She defied COVID restrictions and kept her restaurant open despite state-wide orders, until the local sheriff got a cease and desist order against her. She likes the QAnon conspiracy movement for promoting the belief that "deep-state traitors" are Trump's biggest problem -- not his abyssmal ignorance, his imperial arrogance, or his obvious subservience to Vladimir Putin.
Oh, she's a spectacle all right. In a state that has imposed new gun restrictions following mass killings, she's a cheerleader for assault rifles. At a town hall meeting in Aurora, she yelled at Beto O'Rourke about his pledge to outlaw them. That made the news too.
But the 3rd Congressional District of Colorado seems like safe ground for Boebert's theatrical gun cosplay. It's rated "Solid Republican" by Cook's Political Report. It's a huge swath of western Colorado containing ranches, farms, mountains, and lots of guns.

But Boebert's surprising win in the primary yesterday sent me looking for the Democratic candidate in the race -- Diane Mitsch Bush -- and whether she might be exactly the right antidote to the self-parody of a restaurant owner who knows no embarrassment.
Bush served a term as a Routt County commissioner before being elected to the Colorado House of Representatives in 2012, serving until late 2017 when she resigned to mount a campaign against incumbent Scott Tipton for the 3rd CD. She got almost 44% of the vote in that 2018 congressional campaign, which is a solid base to build on. She's experienced and by now pretty well known as a level-headed, informed public servant.
She offers many stark policy contrasts to Boebert, not least of which is her stand on guns. In 2013, Bush voted for universal background checks and magazine limits in Colorado. She continues to support universal background checks, long-term assault weapons ban, and a ban on purchasing bump stocks. She also supports funding for national research for gun use, safety, and violence prevention through the Center for Disease Control. A number of violence prevention groups have recognized her for her record on combating gun violence, including Colorado Ceasefire, Moms Demand Action, and LEAP Forward.
Guns may become THE campaign issue in the Colorado Third. Boebert's dress-up accessorizing may determine that. But another issue that could play even stronger is health-care, especially in the context of the Trump admin's total bungling of the pandemic response. Boebert's cavalier refusal to protect her customers and her staff from the threat may play hard against her.
Posted by J.W. Williamson at 7/01/2020 08:42:00 AM
Email ThisBlogThis!Share to TwitterShare to FacebookShare to Pinterest
Labels: Diane Mitsch Bush