House Dist. 55 consists of Union and Anson counties down on the South Carolina line, and it's represented in Raleigh by one of the jerkier Republicans in the NC House, Mark Brody, first elected in 2012. He called public school teachers in a May 2018 mass demonstration in Raleigh "thugs," he's been sued multiple times as a general contractor for not paying his bills, and he cosponsored with Rep. Larry Pittman a law to nullify the courts' rulings on gay marriage.
Union County is by far the center of gravity in the district, with some 91 percent of the population (though Democratic candidate Gloria Harrington Overcash is from much smaller Anson Co.). In the district overall, Republicans out-number Democrats 39 percent to 28 percent, but Unaffiliated (33 percent) and Democratic voters together out-number Republicans. I wrote about Union County Democrats in 2018 for posting high numbers of direct voter contacts. They were working hard for Dan McCready (running for US Congress) and Caroline Walker (running for the NC Senate) and others -- most of whom lost their races that fall. Perhaps that knocked the wind out of them, as losses after great effort are prone to do, but if all signs are pointing to an even bigger blue tsunami this year, they need to be banking their fires and keeping the faith. I think they are.
(In 2016, Trump took 56 percent of the vote in this district. That advantage makes the district "Lean Republican," but with Trump's credibility dropping like an anvil in a horse tank, that so-called advantage seems as mealy as old cake.) 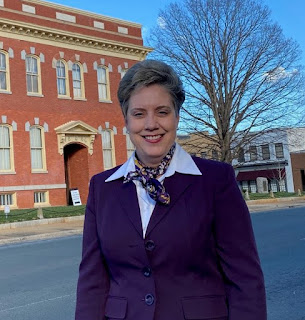 Gloria Overcash has a campaign video, rare among Democratic candidates for the NC General Assembly, and I could envision her as a force to be reckoned with if she can translate personality into voter enthusiasm. But she seems pretty determined to keep anything smacking of progressive issues off her website. She's all about jobs (which in my experience has always been a loser issue for Democrats), and although she hit on the expansion of Medicaid in her maiden interview with the Anson Record, nowhere on her campaign website does she mention any support either for Medicaid expansion or for education funding. She also says she supports the 2nd Amendment, a wholly gratuitous feint toward looking "Republican lite."
She said she was recruited to run by Democratic leaders in Raleigh, perhaps based on her long career as an employee and administrator in the NC courts system as a victim's advocate and a trial coordinator. Or perhaps she was known to them as a past chair of the Anson County Democratic Party.
Both Union and Anson counties overlap with another high-profile race by an insurgent Democrat, Cynthia Wallace (running for Congress in the 9th CD), who might provide some extra boost to Overcash if she is, as rumored, catching fire down there.
Posted by J.W. Williamson at 7/28/2020 09:17:00 AM
Email ThisBlogThis!Share to TwitterShare to FacebookShare to Pinterest
Labels: Gloria Harrington Overcash