So Friday morning NC Senate leader Phil Berger said, "Oh, by the way, a Republican member of the Senate has tested positive for COVID-19," without naming him, and the said senator was apparently on the floor of the Senate the day before without a mask -- few Republicans wear them, in obeisance to Trump and the Trumpists. By Friday afternoon, Republican Senator Danny Britt (Dist. 13 -- Robeson and Columbus counties) 'fessed up -- it was me who tested positive and who might have spread the virus to other legislators.
Real Facts NC had listed Britt's Senate district as one to watch for a possible red-to-blue flip. The Democratic candidate there, Barbara Yates-Lockamy, has been in my eye since 2018, because Real Facts had touted a possible flip in HD46 in 2018 whereYates-Lockamy was running against incumbent Republican Brendan Jones. She lost badly, 36.65% to 63.35%.
So I had opted to ignore the SD13 race this year, based on Yates-Lockamy's track record for that House seat in 2018, and especially considering that Danny Britt actually has a kind of hero status in Robeson County as a "one-man rescue squad" during the aftermath of Hurricane Matthew. District 13 is a minority majority district, with 54% of the population classified as either Black or Native American. You would think that would give Yates-Lockamy an advantage, but it didn't help Danny Britt's Democratic opponent in 2018, John Campbell, even though Barack Obama named Campbell among his "candidates to watch" that year.
I've taken another look at Yates-Lockamy's web presence, and she does seem to be running more of a campaign this year than in 2018. Her website is better, and she's active on Facebook. Her Twitter account, however, only calls attention to her lack of Twitter activity, with one measly post since 2018, and she's still describing herself as a candidate for the NC House.
Lord knows I'm cynical. But I also have a fairly boundless capacity for hope, and I can hope for Yates-Lockamy's success in 2020, along with hoping for a speedy recovery for AppState alum Danny Britt and additional hope that he didn't infect more North Carolina lawmakers. 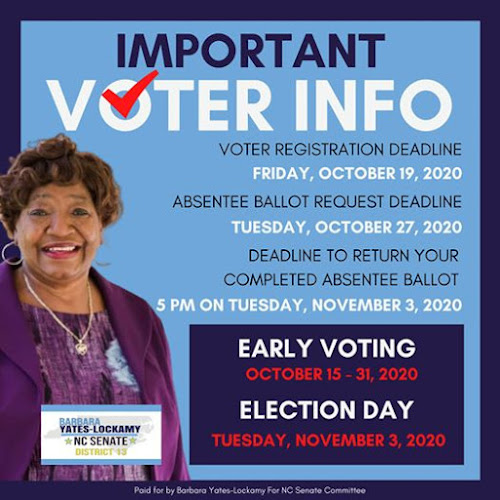