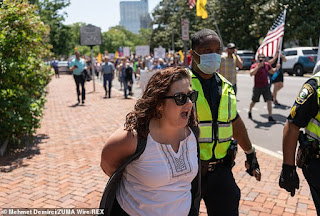 The notoriously reckless Reopen NC co-founder Ashley Smith, who does not live in Boone (as far as we know), is circulating a petition calling on state lawmakers to impeach Gov. Roy Cooper because he issued shutdown orders restricting commercial activity during the COVID-19 pandemic. The petition cites a lack of concurrence from the Council of State -- Republican members Dan Forest, Dale Folwell, Cherie Berry, Steve Troxler, and Mark Johnson, who apparently liked better the cavalier refusal to take the coronavirus seriously, like the governors of Florida, Texas, and Arizona. Ashley Smith's petition for impeachment accuses the governor of infringing on North Carolinians' rights of free speech and the enjoyment of the fruits of their labor.
Lt. Gov. Dan Forest is already suing Governor Cooper over the same issue.
Impeachment would have to begin in the NC House. Republican House Speaker Tim Moore "did not return requests for comment on the petition. Senate President Pro Tem Phil Berger's office said it would be out of turn for Berger to comment, given that any impeachment proceedings would have to start in the House."
In other words, don't hold your breath, Ashley Smith.
Posted by J.W. Williamson at 7/09/2020 10:03:00 AM
Email ThisBlogThis!Share to TwitterShare to FacebookShare to Pinterest
Labels: Ashley Smith, Dan Forest, Roy Cooper

Ashley Smith seems to be exercising her free speech rights no matter how embarrassing and ill-advised.
I wonder if Go Fund Me money obtained by fraud is considered the fruits of her labor.