Sauce for the Goose: NC Dems Utilize 'Dark Money' Too 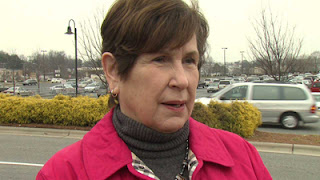 Important piece of sleuthing by Travis Fain for WRAL News: Former NC Democratic Senator Linda Garrou (Dist. 32, Forsyth) is leading a 501(c)(4) effort called Education Now. She's raising anonymous money to target six NC Senate Republican incumbents for defeat, which (all things remaining equal otherwise) would give Democrats control of the Senate and send Phil Berger to the bleachers.
In other words, tit for tat. (A Republican dark money group, Citizens for a Better NC House, is targeting Democrats including Rep. Ray Russell of the 93rd. It was described a few days ago here.) Republican dark money, at least in the case of Citizens for a Better NC House, waxes crude and insulting. They want everyone to see Democrats -- at least Rep. Russell -- as comic book villains.
The Republican targets that Linda Garrou will be attacking -- make no mistake -- also provide rich material, especially for satire, though we trust that Linda Garrou will have better taste.
I don't like dark money in politics. I want the law changed. My dilemma consists of also applauding Democrats for having the balls, for taking a gun to a gunfight.
Who's Linda Garrou?
Sen. Garrou spent some 14 years in the Senate and rose to chair the Appropriations Committee and then became Minority Leader after the Tea Party wave of 2010. But by 2012, Berger and the Boys had redrawn Garrou's district to suit themselves. Garrou announced her retirement. How strongly Democratic had been her old district? She won reelection in the Tea Party Wave with 65 percent of the vote.
If you recall, the redistricting of the General Assembly following the election of 2010 included a concerted effort on Berger's part to get rid of incumbent women. There were only six women in the Senate going into 2012, and Berger's redistricted map double-bunked three of them, including Garrou. (The scene was even worse in Tim Moore's House. Some 22 Democratic women reps were either double-bunked or drawn into districts with incumbent Republicans. All of this redistricting in both Senate and House was eventually ruled unconstitutional by the courts.)
So, what can we say about Garrou's waiting two presidential cycles after her targeted elimination to take such action with such a leadership role -- except, by Gawd, revenge really does taste sweeter when it's cold.
The Republican incumbents Garrou is gunning for: 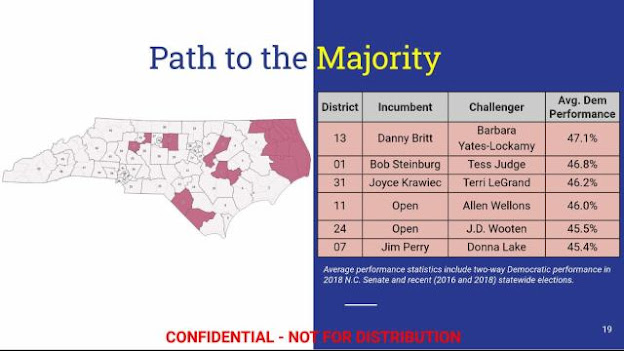 The Democrat challengers on that list have all been touted multiple times by several prognosticators as good prospects for flipping a red district. Garrou's dark money can help perhaps. It might improve Dem performance, no? Or depress Republican turnout, which is really the metier of the 501(c)(4), isn't it?
Posted by J.W. Williamson at 7/23/2020 09:13:00 AM
Email ThisBlogThis!Share to TwitterShare to FacebookShare to Pinterest
Labels: Linda Garrou