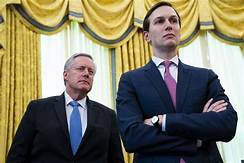 Big story in Politico this Monday morning about how Congressman Mark Meadows' apotheosis as Chief of Staff to Twitterman has turned out to be a longterm migraine and not the picnic Meadows apparently thought he was being gifted with. "Three-and-a-half months in, he has told people he is struggling with the chief’s job and that if Trump wins reelection, he’ll stay in the role only for an additional year, if that long."
If that long. Indeed.
Like any good fiscally conservative Republican, he says he likes all the perks of flying on Air Force One, the presidential mess, the little match books with the presidential seal that he can pocket for his friends. It's good being crammed into the armpit of the most powerful individual on earth, so far as the trimmings are concerned, but not so good presiding over the great dumpster fire of a failed and still failing presidency.
“Look at what has happened on Meadows’ watch: the walk to Lafayette Square, the complete mishandling of the Covid-19 crisis, the defense of the Confederate flag and the botched handling of the intelligence on the Russian bounties on U.S. soldiers. We could go on and on. It has been one of the worst stretches of the Trump presidency,” said Chris Whipple, who's written extensively on White House chiefs of staff. “He took the job, so he owns it. That was his first big mistake.”
When did you first discover you had traded a safe seat in Congress in perpetuity for a thankless post in charge of sitting outside Jared Kushner's door? "...Meadows quickly learned to yield to the existing power structure rather than trying to commandeer it. That means essentially recognizing the West Wing is Jared Kushner’s domain...."
D'oh! Second fiddle to the boy genius! Does the upholstery on Air Force One really make up for that humiliation?
Posted by J.W. Williamson at 7/15/2020 10:01:00 AM
Email ThisBlogThis!Share to TwitterShare to FacebookShare to Pinterest
Labels: Donald Trump, Jared Kushner, Mark Meadows

It's more likely Mark Meadows is the worm in a rotten cabbage.