How Big a Tsunami in November? Democrat Cynthia Wallace in NC09 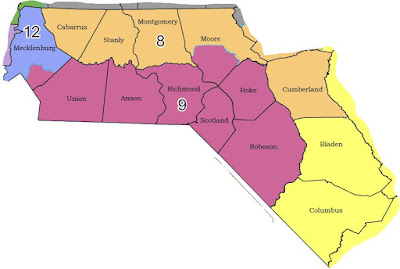 Something's happening in the 9th Congressional District of North Carolina. The Cook Political Report recently moved the ratings of some 20 US House districts to show a trend toward a Democratic blue wave this November, the NC 9th among them, moving it from "Solid R" to "Likely R." That might not seem very definitive, but movement of any kind is often indicative of massive shifts in direction which, like faith, produce evidence of things not seen.
Some of us had high hopes that Democrat Dan McCready was going to win the district in last September's special election there, and he did come close, losing to Republican Dan Bishop by 3,788 votes (out of 190,506 total votes). But McCready failed to really energize new voters or re-engage only-sometime voters, as I wrote about after his loss. The district map has been redrawn since that special election, losing Cumberland County but gaining more precincts in southern Mecklenburg. 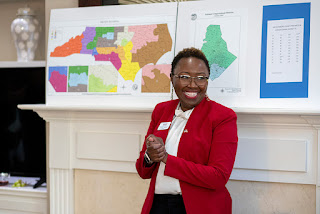 More than the changed map, perhaps, in accounting for shifting expectations in the 9th is the change of candidates, for Democrat Cynthia Wallace seems freshly minted to energize those underperforming Democrats that Dan McCready failed to win over. I've been spending time on her website and on her social media, and she seems both highly qualified and brimming with confident energy. She earned a mathematics degree at Spelman College in Atlanta, a master's degree in statistics, and she works in the high pressure financial services industry in Charlotte as an expert in risk management and government regulations.
Perhaps overlooked in accounting for her surging candidacy is her deep involvement in Democratic Party activism. She's currently the Democratic chair of the 9th Congressional District, which means she's well known in all her counties among progressive activists, giving her a network of volunteers and a base of support that Dan McCready had to build from the ground up.
It perhaps also helps her standing that she's up against incumbent Republican Dan Bishop, recently a senator in the General Assembly and pretty widely known as a dick. He was the chief author of NC's notorious "bathroom bill" and has never retreated an inch on being proud of what he did. Shortly after he took his congressional seat following the special election in Sept. 2019, Bishop became the first member of Congress to divulge the purported name of the whistleblower whose memo sparked the House impeachment inquiry.The federal Whistleblower Protection Act makes it illegal to divulge the name of a whistleblower, but so far as we know, Bishop has suffered no consequences for what he did.
Maybe Cynthia Wallace will deliver the comeuppance that Dan Bishop so richly deserves.
Posted by J.W. Williamson at 7/21/2020 09:09:00 AM
Email ThisBlogThis!Share to TwitterShare to FacebookShare to Pinterest