Where is Union County?
Below Charlotte-Mecklenburg, on the South Carolina line. It's historically Jesse Helms country with the towns of Monroe and Wingate. But a portion of Union could also be considered suburban Charlotte, as it lies just south of the I-485 belt line.

Democrats in Union County are organized this year and energized. Couldn't help noticing how Union stands out among the 100 counties for current direct-voter contact. They're doing more door-knocking and phone calling than our larger Democratic strongholds in Wake and Mecklenburg. Which means they're supporting the wave that could roll all the way to Raleigh (not to mention DeeCee).

Union's Star Candidates in 2018
Dan McCready, running for the 9th Congressional seat. We've written about McCready several times, and he's attracting national support. Whether the map for the 9th is going to survive current legal action is another question, but at the moment McCready looks like a winner in a flippable district (which used to be Robert Pittenger's. He was involuntarily retired in the May Republican primary). 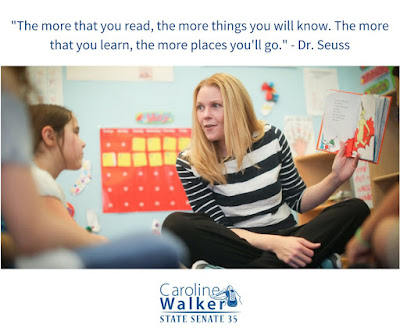 Caroline Walker, running for the state Senate (District 35). We first noticed Walker back in February. For a year like 2018, she's got it all ... a compelling resume in both business and education, an exemplary personal life that speaks to the struggles and rewards of many ordinary Union Countians, and an inspirational vision of helping rather than hurting her fellow citizens.

No one that I know of lists Senate District 35 as "in play," but Walker is running for an open seat (a plus), she's showing canny instincts as a candidate (check out her Twitter feed), and she's obviously got an energized Democratic Party behind her.

Senator Jeff Jackson of the nearby 37th District has been raising money across the state to help flip the NC Senate -- or at least break the Republican super-majority -- and I certainly hope that some of that money goes to support Caroline Walker. Her bravery and resolve are an inspiration in a year rich with inspirational first-candidate stories.

D'Oh! Forgot Rick Foulke
Also in Union County, Rick Foulke is running for the NC House District 68 seat. We first took note of him back on January 2nd of this year.

Like Ray Russell, Foulke was until recently an Unaffiliated voter. He was a doctor in the Army before retiring as a lieutenant colonel and going into private practice as an oncologist, first in Charlotte and then in Matthews. He decided to register as a Democrat after the Republicans refused to expand Medicaid. Those and other Republican policies "got me off the sidelines and persuaded me that I really need to be in this fight," Foulke said. “I spent my career diagnosing people with cancer, telling them I can save their lives but see them die because they couldn’t afford the treatment,” Foulke said. “That’s why I’m running.”