Your State GOP Reps on Break 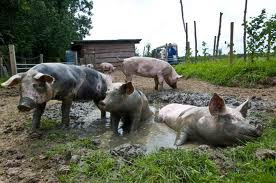 Taking advantage of a loophole in laws governing political fundraising from special interests, the new Republican majority in the NC General Assembly will hold a swank shake-down of corporate money tonight in Raleigh.

We've already experienced the corporate coup in Washington and the total takeover of every branch of government by the rich. The same coup is well underway in North Carolina too.

The Raleigh News & Observer publishes strong words today in an editorial about the Republican pay-to-play culture of corruption, now in full flower. It does not lessen the moral spectacle to now say "the Democrats did it too!" It only heightens the crashing irony behind the promises of these "Christian" hypocrites.
Posted by J.W. Williamson at 6/29/2011 10:36:00 AM
Email ThisBlogThis!Share to TwitterShare to FacebookShare to Pinterest
Labels: corporate power, Republican "brand"

Nothing like watching Republican Corporate Pimping going to a whole new level in Raleigh!

Is it wrong for Republicans but OK for Democrats? Where is the Watauga Watch complaint about the Democrat fund raiser scheduled for July 12?

From Raleigh N&O:
"Senate Democrats are getting in on fundraising with an event scheduled July 12, the evening before the legislature is scheduled to start a new session.

It's not okay for either party; I think what JW is zeroing in on here is the hypocrisy of the Republicans who ran on a platform of cleaning this kind of thing up and have instead been finding ways to trump the Democrats in pay-for-play politics.

Yes, the Republicans said they wouldn't do it--and they're doing it. Yes, the Democrats say they won't do it ("Hope and Change" anyone?)--and they still do it. Both sides sound like 2nd graders chanting "I know you are, but what am I?"

We can stand around with our heads up our butts arguing about who is the bigger hypocrite or we can spend our time trying to get rid of this professional ruling class in Raleigh/DC that is sucking the life out of the rest of us.

And by the way, that ruling class includes politicians, bureaucrats, and lawyers, not just corporate leaders. Anyone who thinks they aren't in bed with corporations and enriching themselves is a naive fool.