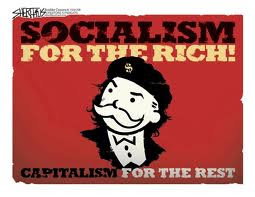 The parent company of Lowe's Foods, Alex Lee Inc., had received $2 million in tax incentives from the General Assembly and pledged to create 200 jobs for that dole.

Instead, the company recently laid off about 50 workers due NOT to the economy but to ... wait for it ... increased automation at its plant.

Under the terms of its sweetheart tax break, the company was supposed to pay back that $2 million if it didn't create the 200 jobs.

But not to worry. Alex Lee Inc. covered its wide butt by contributing $15,000 to the NC Republican Party's Senate Caucus.

And, lo, the heavens opened and the blessed sun shown down upon Alex Foods Inc. Slipped into House Bill 751 in the waning hours of the NC General Assembly's recent feeding frenzy was a provision exempting Alex Foods Inc. from paying back the tax incentives.

Some Democrats in the NC House voted for this pay-off. Some Republicans voted against it. "The bill sailed through the Republican-controlled Senate 42-0." Far as we can tell, the Dems got no cash for their vote; the Republican senators got a pile. So it goes.
Posted by J.W. Williamson at 6/22/2011 11:57:00 AM
Email ThisBlogThis!Share to TwitterShare to FacebookShare to Pinterest
Labels: corporate power, corporate welfare

I missed one, Clark Jenkins a Democrat was given $3500.00 and Senator Garrou received $4000.00. Do your research. The truth is important.

I guess I'll switch back to Harris Teeter

So what exactly is the surprise here? What do you expect from these "bought and paid for "POS"? We're dealing with government "for the rich, by the rich, and totally corrupted by the rich". Oh, this isn't government: this is total corruption! And the saddest thing is these 1 percenters could care less because they got theirs and can be completely insulated from those they robbed.

The teachers union is one of Bev Perdues biggest supporters.

But, I am SURE that had nothing to do with her vetoing of the budget nor will she likely veto the dues witholding bill currently on her desk.

Switch to Food Lion; they're being boycotted by some right-wing activists because of their open support for the LGBT community. I use to shop at Lowes regularly but now it's Food Lion for me!

What jobs was Lowe's Foods bringing in anyway? Stock clerks, bag boys, and such? Pretty much minimum wage type jobs, mostly, right? The state could have saved the big box urban sprawl, asphalt, utility and landfill costs, etc., and just given the $2 mill direct to 200 needy people. At $10,000 per person, that would keep quite a few families in groceries for several months, and tide them over till they could find better jobs....

Thanks for the info Not Really....great idea!