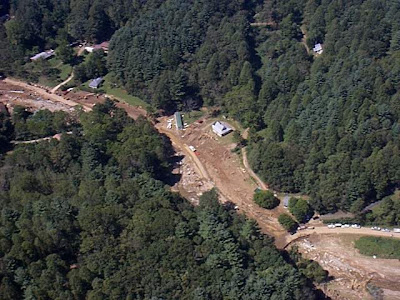 Macon County, NC, where five people were killed in 2004 in a slope failure, is moving forward on adopting steep-slope building regulations. (The infamous Peeks Creek landslide is pictures to the left.)

Haywood, Jackson, and Buncombe counties have already implemented such regs, despite the howls of developers that the world would end.

Not only has the world not ended, but the chair of the Macon County planning commission, who also happens to be a grading contractor, real estate agent, and golf course developer, recently received information that the lack of steep-slope regs in Macon was driving away potential investors.

Lack of. (Read the article linked above for the source of that counter-intuitive conclusion.)

"Some of the naysayers say it's going to stop development,” this gentleman said. “But we can't find any examples of an ordinance that has.”
Posted by J.W. Williamson at 6/03/2011 08:47:00 AM
Email ThisBlogThis!Share to TwitterShare to FacebookShare to Pinterest
Labels: steep slope hazards

Boone was ahead of the game. Too bad Watauga County is so unenlightened. Maybe they should hire an actual planner?

Government regulations are actually good for business. When consumers have confidence that they are not getting ripped off, they spend money more freely.