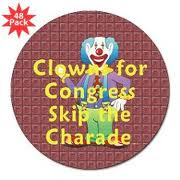 The Republican grandees in the NC General Assembly were bragging that they have a budget "compromise" ready to unveil that will win Democratic support enough to be veto proof.

Gov. Perdue swept away this buffalo dust with a single swipe.

She sure sounds like she's up for a little street brawl:

"...She called the compromise budget plan a ‘charade.’ 'There is nothing else left for them to cut but warm bodies and teacher, educators, teacher's assistants, so don't let them fool you. They are not protecting public classrooms. The thing that irritates me so much, it just makes me so angry is that they don't have to do this,' said Perdue.

"She contends that the budget just moves money around, leaving it to local school districts to make tough choices."
Posted by J.W. Williamson at 6/01/2011 01:37:00 PM
Email ThisBlogThis!Share to TwitterShare to FacebookShare to Pinterest
Labels: Beverly Perdue, North Carolina budget

Simple, the NC republican budget is like the Ryan Medicare plan; reforming education as you kill it off.
We can't be bothered by education anymore...we have dinosaurs to ride
to the pearly gates... well, those who can afford the ticket to the amusement park have their own private 'stagazorouses' in their vaulted garages, I should say.

Screw our children, the enviroment, too: being republican matters more.....Tea anyone?

Yes, Thank you. It is long overdue.