Other Rapes of Democracy, Other Laws 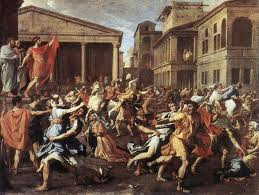 The NC General Assembly rushed through 66 new laws yesterday, including the "New Budget for the Last Century."

Included in all that backwardness is a massive rewrite of our election laws (Senate Bill 47) now moving in the House Elections Committee, including (but not limited to) these provisions:

shorten the early-voting period by a week

repeal publicly-financed elections for the Superintendent of Public Instruction, Insurance Commissioner and Treasurer

All of this in addition to the separate photo ID law that's contained in a separate bill. But notice that last provision above and then compare with all the ones coming before. Could anything be clearer? The new Republican majority in the NC General Assembly intend to make it much easier for corporations to control the vote while making voting itself harder for everyone else. (Well, not everyone. Just poor people, minorities, students ... you know, not the Republican base.)

True to their new manner of governing, the Republican majority allowed no public comment during their committee consideration of this abomination. (Correction: “worse than an abomination,” according to Rep. Mickey Michaux, D-Durham.)

Bright spot: Gov. Perdue has promised to veto the photo ID law, and so far the Five Goobers haven't voted with the Republicans on it. Surely The Guv will also veto this rape of ballot access in North Carolina. There's no telling what the Five Goobers will do then.
Posted by J.W. Williamson at 6/15/2011 09:58:00 AM
Email ThisBlogThis!Share to TwitterShare to FacebookShare to Pinterest
Labels: corporate power, voter suppression, voting rights