Beware of the Man Who Can't Be Embarrassed 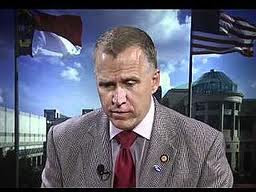 Mere minutes after he discovered that his Republican caucus meeting had been broadcast to the press corps through an open mike, Republican Speaker Thom Tillis betrayed no sense of awkwardness but more of a "So what, bitch?"

The provision slipped into the budget -- which supposedly five Goobers from Demsville will betray the governor and vote to override her veto -- is an end-run for redistricting meant to guarantee that Attorney General Roy Cooper is cut out of the process along with the U.S. Department of Justice.

The Republicans intend to submit their redistricting plans directly to the D.C. Circuit Court, considered the most conservative in the country, rather than follow usual procedure and go through the DOJ. Sure, gloated the unembarrassable Thom Tillis: "Clearly, we’d rather take it through the channel that we think best benefits us in terms of getting the plans through. I generally have a high degree of confidence in the courts."

That last sentence is particularly entertaining, considering the GOP's perennial need to bash "activist" judges. It's different when the judges belong to them.
Posted by J.W. Williamson at 6/05/2011 10:10:00 AM
Email ThisBlogThis!Share to TwitterShare to FacebookShare to Pinterest
Labels: North Carolina budget, redistricting, Thom Tillis