Thom Tillis Catches a Cream Pie in the Face 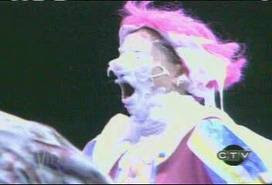 Mark Binker, the General Assembly reporter for the Greensboro News&Record, is reporting an unusual moment last night in the Clown College: one of the chief clowns, a Republican committee chair no less, openly protested to Speaker Thom Tillis about the wild pace of the railroad being run through the building:

Shortly after 11 p.m. Thursday night the House introduced its third supplemental calendar for the day, a three-page affair with bills many lawmakers knew nothing about....

“Mr. Speaker, ladies and gentlemen of the House," [said the offended Republican committee chair], "you’re looking at a three-page supplemental calendar, one whole page of which are bills on second and third reading, which have never been considered by this body before. I don’t know how many amendments it will take; I don’t know how much discussion there will be.

“But folks, we’re tired, we’re not in a position to think clearly and pass good legislation.” ...

Which implies, naturally, that the new Republican majority had heretofore been thinking clearly and passing good legislation ... but let that go as too too painfully obvious.

Binker says that it's not unusual to hear this sort of complaint from the minority, but when Thom Tillis's own troops start complaining like that, well, people take notice.

BOTTOMLINE
Tillis relented for the moment, and the House is back is session this morning and plans a very rare Saturday session, probably along with the Senate, which still has its own mischief to finish.
Posted by J.W. Williamson at 6/17/2011 09:05:00 AM
Email ThisBlogThis!Share to TwitterShare to FacebookShare to Pinterest
Labels: Mark Binker, Thom Tillis