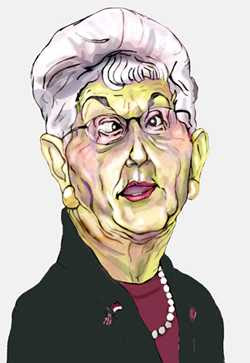 "It's unconscionable that we have 45 million people in this country getting food stamps," she said in floor debate on June 14 over a Republican bill to cut spending on food assistance programs in the Department of Agriculture (H.R.2112). It's not unconscionable, in her view, that we have millions of citizens without adequate food. It's only unconscionable that the government helps them. "That's a result of the policies of our Democratic friends across the aisle," she added. Well, yes. And proud of it!

Also on June 14, and in consideration of the same House bill, The Madam, whose contempt for poor people in general and for poor women in particular is by now quite sufficiently obvious from outer space, offered an amendment to the bill that would zero out funding for a peer counseling and support program for low-income women who never learned how to breast-feed (hattip: MM). Even her normally hard-hearted Republican colleagues in the U.S. House wouldn't go along with that. The amendment was defeated 119-306. It was something that the infant formula industry, which relentlessly markets its product to new mothers in hospital neo-natal wards, would have benefitted from.

Just another day for The Madam, the alleged woman who loves to brag about how poor she once was and about how much she continually prays to God for divine guidance.
Posted by J.W. Williamson at 6/16/2011 09:20:00 AM
Email ThisBlogThis!Share to TwitterShare to FacebookShare to Pinterest
Labels: Virginia Foxx