Portrait of a Goober 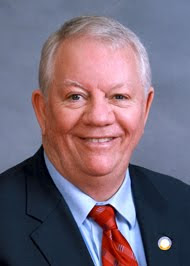 NC House member Bill Owens of Elizabeth City, one of the Five Goobers from Demsville that the Republicans are counting on to override Gov. Perdue's veto of their budget, has already announced that he's probably not going to run for a 10th term in the NC House, which means in all likelihood that he's turning a deaf ear to his own political base.

So the editorial in the Elizabeth City Daily Advance probably won't prey on his conscience, but it should. (Hattip: Progressive Pulse)

Owens got concessions in the budget for his district -- those goodies that get traded every day in our legislative bodies -- but The Daily Advance ain't swayed by money for the Museum of the Albemarle and money for the Mid-Currituck Bridge across Currituck Sound and an exemption from tolls imposed on other ferries for the Knotts Island and Ocracoke ferries. The editorialist actually sees the bigger picture -- and the huge damage -- in the rest of the Republican budget:

...these concessions [mentioned above] seem like high prices to pay for a budget that, among other things, is still projected to eliminate 13,000 education positions, including 9,300 in the public schools; lose the state $1.2 billion in federal matching funds for Medicaid funding; slash funding for the Clean Water Management Trust Fund from $100 million annually to $11.3 million; and eliminate the North Carolina Health and Wellness Trust Fund, a program that fights obesity and that’s put a significant dent in the number of teen smokers in North Carolina....

It's an open debate whether Rep. Bill Owens really thinks he's doing the right thing, strapping on that feedbag with the Republicans, or whether he's just very bedazzled with his own power as a horse-trader.
Posted by J.W. Williamson at 6/10/2011 09:26:00 AM
Email ThisBlogThis!Share to TwitterShare to FacebookShare to Pinterest
Labels: Bill Owens, North Carolina budget

Shameless hussies, all of them. Thanks for keeping up with it. I just hope voters remember them in November, 2012.

He's a person who thinks compromise means giving the other side exactly what it wants. Oh, and an idiot.