The Human Cost of a New Map 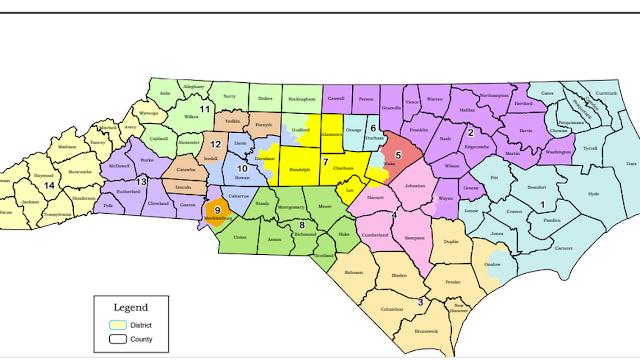 You should already know that Democratic Congressman G.K. Butterfield, who's served in the US House representing the (old) CD1 since the election of 2004, saw his residence moved into the new 2nd, which he recognized would be next to impossible for a Democrat to win. So he's retiring. “North Carolina is the battleground,” Butterfield told The N&O Friday. “I’ve looked at all of this and weighed all of the circumstances and I’ve just decided that I don’t want to run on that map that is gerrymandered. That is unfair ... This map is the most partisan and racially gerrymandered I have ever seen. It is extreme. Every political party pushes the envelope a little with redistricting but this is extreme to have 11 Republican seats out of 14. On a good day 10 out of 14 seats is unlawful, unconstitutional and undemocratic,” Butterfield said.
Meanwhile, former state Sen. Erica Smith, who lost the US Senate primary to Cal Cunningham in 2020 and was an announced candidate again for the Richard Burr Senate seat in 2022, has left the Senate race to run in the new 2nd CD. She wasn't getting any traction in the Senate race. Maybe she can flip what has become a much more Republican district. DavesRedistricting.org scores it 65% Republican, 33% Democratic, and 68.8% white.
Democratic candidate Richard Watkins, a political novice but an accomplished scientist, has also left the US Senate race, where he was completely overshadowed by Cheri Beasley and Jeff Jackson, and says he will now run for Congress in the new 6th CD, where the dean of liberal Democrats David Price has announced his retirement. The new 6th is one of the "safe" Democratic districts, where there's already a pile-on of new candidates. State Sen. Wiley Nickel announced first, followed by Durham County Commissioner Nida Allam, a Muslim woman who made a big splash, followed by state Sen. Valerie Foushee, who instantly became a front-runner.

Former U.S. Rep. Mark Walker, a Republican who has been getting nowhere in the Republican primary for Richard Burr's Senate seat (despite or because of the endorsement by Madison Cawthorn), is rumored to be launching a 7th District race, where state Rep. Jon Hardister, also a Republican, is also considering a run. That's the district where football star and Yale graduate Bo Hines ("the educated Madison Cawthorn"), who once upon a time in the recent past said he was going to challenge Virginia Foxx, has finally landed his nascent congressional campaign. He's a Trumper. The new 7th CD is 78% Republican.
Posted by J.W. Williamson at 11/21/2021 10:28:00 AM
Email ThisBlogThis!Share to TwitterShare to FacebookShare to Pinterest
Labels: Bo Hines, Erica D. Smith, G.K. Butterfield, Mark Walker, Nida Allam, Richard Burr, Richard Watkins, Valerie Foushee, Wiley Nickel