Former Republican state party chair and news reporter for the Carolina Journal, Dallas Woodhouse -- whose sources inside NC conservative circles must be legion -- broke the news that Congressman Madison Cawthorn was thinking of running in the adjacent 13th District rather than in his own 14th. Cawthorn said it would make North Carolina more conservative. He also said that Donald Trump fully supports the idea. He's talking it over with his wife this weekend and will get back to us on Monday. (My own confidence in this rumor is pretty much nil, but it's a welcome diversion on a Thursday.)

If that actually happened, O! O! O! the dominoes would begin falling. The 13th CD -- by all accounts -- was carved out explicitly to enable NC House Speaker Tim Moore to move his mahogany butt from Raleigh to DeeCee and to have a safe seat thereafter for as long as the grass is green or as long as it takes the rainmaker Moore to become sufficiently richer. He's not happy about Cawthorn's prospecting on his stake. And I bet he's on the phone right now.

Side note: Didn't know this. North Carolina needs to be more conservative, and Donald Trump agrees that Tim Moore needs to be eliminated. Interesting. I wouldn't think Trump would have a clue who Tim Moore is.

'Nother side note: If you're into state politics, what would be greater entertainment than Tim Moore's having Madison Cawthorn as a primary opponent? Two grifters -- of greatly differing ages and understanding -- enter. One grifter leaves. 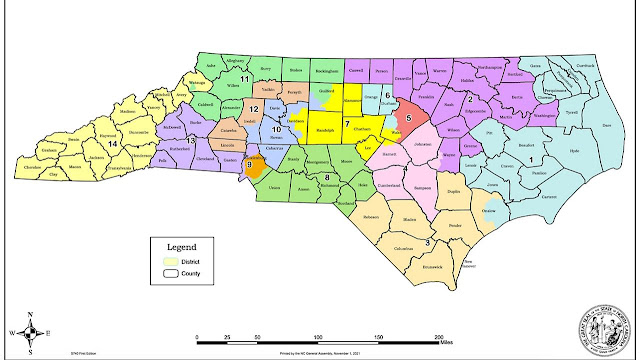 The other dominoes: If Cawthorn left the 14th open, three more Republican wannabes (Ralph Hise, Deanna Ballard, and Chuck Edwards) would also reportedly be making a decision about getting into the Republican primary (which already has three announced candidates -- see below). I first saw those new names on Dallas Woodhouse's Twitter.

Edwards, like Ballard and Hise, is currently an NC state senator. His senate district 48 includes the heart of the new 14th -- Buncombe and Henderson counties. Edwards was appointed late in 2016 to replace the retiring Tom Apodaca, then won on his own in November 2016, ran for reelection in 2018 and got 56% of the vote, won again last year with almost 59%. He seems like a contender. Maybe stronger than Ralph Hise. Indubitably stronger than Deanna Ballard.

We have to leave for a later episode why Hise, head of the NC Senate redistricting committee, drew himself and Deanna Ballard into the same NC Senate district. Double-bunking of incumbents is usually received as a slap in the face ("someone wants to get rid of me"), is never welcome. Perhaps Hise and/or Ballard already had plans for a change in career, so maybe it's no biggie.

The 3 Republicans Already in the Race

Wendy Nevarez, ex-military and a moderate.

Bruce O'Connell, who came out with a boilerplate conservative "Contract" with the voters, making him look old and uninspiring. He runs the Pisgah Inn on the Blue Ridge Parkway

Rod Honeycutt, also as dull as yesterday morning's dishwater, but he has been the most direct in attacking Cawthorn: "I will not watch from the sidelines as inexperienced, self-promoting characters seek to further careers while the hard-working men and women of WNC suffer the consequences" (quoted on WataugaWatch).