A New Congressional District Map--This Could Be Your Future, Watauga

You may have to squint below to see that little finger of crookedness poking up into Watauga County (yellow) from Caldwell (pink). (There's a bigger, better image on the NC Senate redistricting site.) What used to be Virginia Foxx's 5th District gets renumbered as the new CD 11, and most of us in Watauga -- 19 out of 20 precincts -- get combed out of Foxx's fur to be the northern-most pains-in-the-ass in the new 14th CD, which would be mainly Madison Cawthorn's old 11th. (Hello, Madison!)

This map has been officially submitted in the NC Senate by the Republican majority, good Christian gentlemen all. But not to fret, O my Brethren. This map will still face negotiation with the Republican majority in the House, and who knows what we're going to end up with. This map at least represents pretty much a contender in the "how low will they go" sweepstakes.

As far as the NC Senate Republicans are concerned, and to state the obvious: With this map at least, Virginia Foxx gets to keep the core of her old Fifth District, minus the bulk of Watauga County, which has only rarely even voted for her -- her first race and one other in a total of nine reelection campaigns. Watauga can't stand her.

(NOTE: This version of the NC Senate proposal is according to NC Policy Watch and Lynn Bonner, but the map I see at the link above has a very different Dist. 9, and 10, etc. and so does the Princeton Gerrymanding Project. In both maps, however, the finger they gave Watauga remains.) 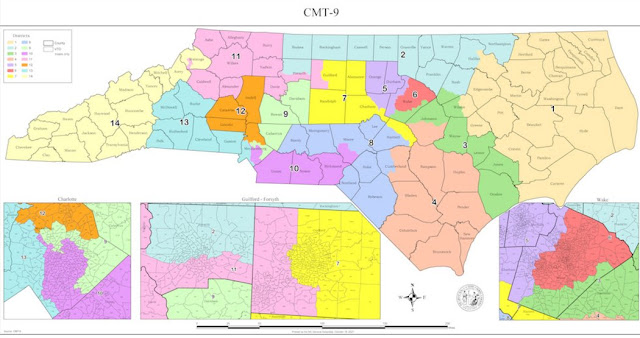 You see that little hook of Caldwell pink, right? invading the integrity of Watauga yellow. I haven't seen the precinct-level blowup of that map, but that pink hook shore nuff looks like the Watauga Precinct of Watauga County, where The Foxx makes her home and some of her fortune: 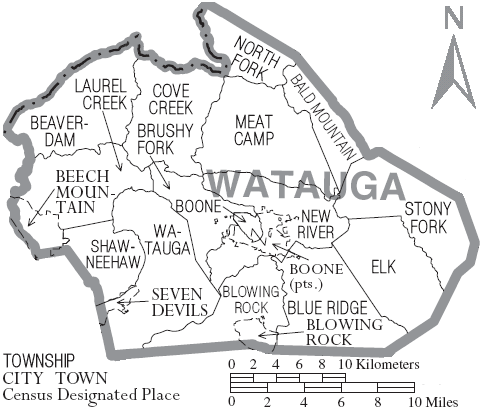 The Watauga Precinct hook looks pretty on the nose for being the same Pink Hook in the top map.

If this is the map that makes it through the approval process, most of Watauga will be in a new district numbered 14. Meanwhile, Foxx -- whose political career we're all very interested in -- will end up with new territory that goes east all the way to Guilford County, takes in the southern quarter of Forsyth, and extends west to Ashe, with that little tickle-finger up Watauga's backside.

If most of us Wataugans end up in the new 14th, I can live with that. According to the Princeton Gerrymandering Project, the new district would have a Democratic vote share of 46.31% (vs. 53.69% R), and that's a number someone smart could work with. Plus it would be cool to collaborate with Buncombe.

The Princeton Gerrymandering Project graded this map "F" for partisan fairness because it creates 11 Republican and three Democratic districts in a state that has proven more purple than that. The three "solid Democratic" districts in this map would be the new districts 5, 6, and 9, but the 9 of this map -- all three dependent on the majorly urban Wake and Mecklenburg counties.

Sen. Ralph Hise, Republican head of redistricting in the NC Senate from Mitchell County, drew that map. He at least submitted it. A troll drew it.