What's the Matter with Deanna Ballard?

Word filtering out of Raleigh -- and by "filtering" I mean strained and adulterated before it reaches these nether regions of the state -- authoritative word is that Sen. Ralph Hise drew Sen. Deanna Ballard into the new 47th NC Senate District, double-bunking her with him, because she's not won the esteem of Phil Berger and his boys (of which Ralph Hise is one). Deanna Ballard -- not always a team player with Berger and the boys? Surprised. But okay, yeah, maybe. (I'm fresh out of guesses why she may have fallen from grace; hoping someone will enlighten me.) I confess that I've never thought of Ballard, the recruit and employee of Franklin Graham, as having an appreciable ounce of independence. But because I'm a liberal Democrat, I'm prepared to accept the strangest things.

Opinions up here in the nether regions think it likely she's going to announce for the new 14th Congressional District -- take that! Phil Berger -- and that if she does announce, she'll instantly be the frontrunner among the Republicans and that she will sweep both the Republican primary and the general election against Jasmine Beach-Ferrara, who the smart money sez will be the Democratic nominee.

I don't know about any of that, but I pay attention to opinions coming from old hands in North Carolina politics. As a congressional candidate, Deanna Ballard is going to be new to most of that district (except for Watauga and Avery), and most of the Republican primary voters in the old 11th CD have been enthralled by the mad masculinity of petulant Madison Cawthorn, and they may not immediately take to Ballard's much softer presentation of politics. 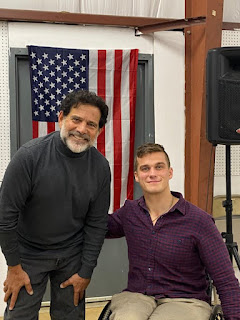 In a congressional race, Ballard's main rival might be Bruce O'Connell, who's busily trying to don the Cawthorn mantle after being a potential rival in the Republican primary. O'Connell literally twisted himself into the frame to get photographed with Cawthorn, who does not look fizzy to be symbolically blessing the candidacy of the man who had recently set out to beat him out of his gravy train.

If Sen. Chuck Edwards from Henderson County decides to run -- who's been prominently mentioned as considering the race -- that will necessarily complicate things further. We don't know what's going to happen, but plenty of other people think they do.