Are You Not Rejuvenated, 14th CD?

So yesterday, and on cue, the relocated-from-Detroit Michele Woodhouse, the Republican chair of the old 11th Congressional district, announced her candidacy for Madison Cawthorn's seat. She had scrubbed her social media of certain histories, but they were going to emerge anyway: 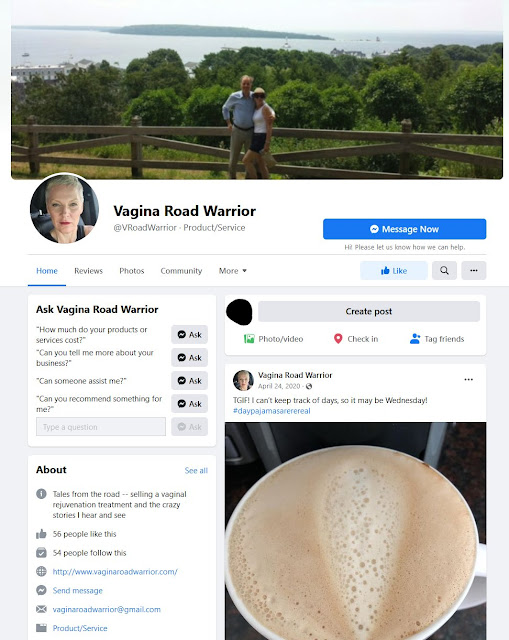 This was her business. "Vaginal rejuvenation." Is that a thing? I would Google, but I'm afraid to.
Anyway, there was some stout pushback from fellow Republicans in the district, apparently resentful that Michele Woodhouse had been scheming for some time to keep the lane open for herself. The following posted by a Cherokee County Republican activist: 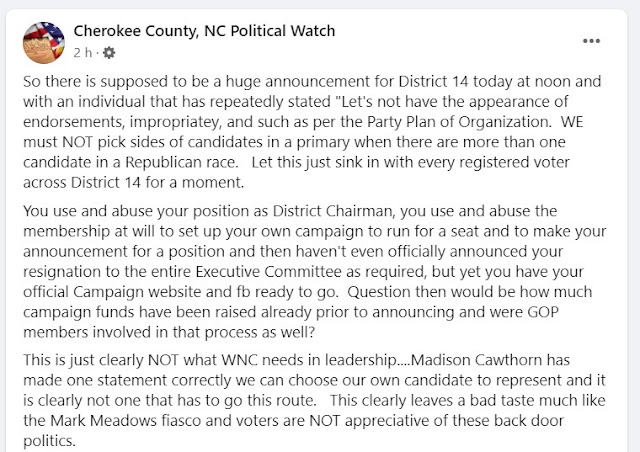 Who else isn't happy? Bruce O'Connell, one of the three Republicans already announced for the Cawthorn seat (and the most conservative of the three). O'Connell said the announcement prompted him to speak out. "He described several months of overt and indirect pressure from Woodhouse to drop out of the race for District 14, previously District 11. 'Ms. Woodhouse used a number of tactics to discourage my candidacy for this office, including "blacklisting" me and other candidates from speaking at GOP events,' " O'Connell said. As GOP district chairperson, Woodhouse was obligated to be fair and impartial and to encourage a robust political environment embracing all GOP candidates, he said. Instead her tactics of repressing contenders could well have violated ethical standards.
Oh Cawthorn! You've caused a massive pileup of bad juju on the Republican candidate fast-track.
Posted by J.W. Williamson at 11/19/2021 08:55:00 AM
Email ThisBlogThis!Share to TwitterShare to FacebookShare to Pinterest
Labels: Bruce O'Connell, Madison Cawthorn, Michele Woodhouse