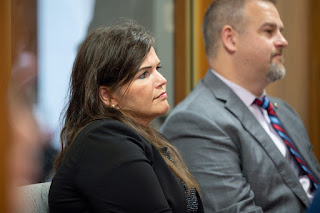 Saw this headline in the High Country Press the morning after Thanksgiving, just in time for giving thanks: "Sen. Deanna Ballard Secures Critical Improvements for District 45." I immediately said out loud, "Oh she's definitely running for something."

To recap: She's double-bunked with Sen. Ralph Hise in what used to be her NC Senate District. What will she do? What will Hise do? (Hise is rumored to be considering running for the congressional seat -- CD14 -- as is Ballard.) Putting out an eye-grabbing press release like the one referenced above is evidence of a politician who intends to be noticed and of a comms team honed for the main chance.

The story in the High Country Press lists all kinds of special budgetary grants aimed at projects in Watauga and the other counties in Ballard's 45th Senate district, and I have no inside poop nor any reason to doubt the worthiness of any of those grants. I tend to support government funding of community-based projects, so good on Deanna Ballard. I do note that AppState is singled out for some $122 million, and I'm sure they can use it.