It All Comes Down to Sheri Everts 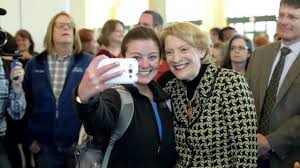 Last Wednesday, Oct. 27th, some ambitious faculty members at Appalachian State University -- alarmed by the chancellor's governing style and her administration's evident ambition to bend town government to the maximum benefit of ASU -- invited everyone from the university and everyone from the non-university community to come to a town hall in the county library and air both grievances and potential solutions for a major university's tendency to eat the town of Boone. The town hall was organized by ClimAct, a student environmental club, and the Appalachian State chapter of the American Association of University Professors (AAUP). Clark Maddux, American Studies specialist, presided.

Today the High Country Press published both a detailed account of the town hall and a response to the criticism submitted by Megan Hayes, Associate Vice Chancellor and Chief Communications Officer for ASU -- Chancellor Sheri Everts' flack. You have to scroll way down for Hayes's answer to the townhall, though you may end up wondering why she would have taken the time for this, pablum-stained wallpaper about how Chancellor Everts has lots of meetings with lots of university groups. And she'll keep on meeting.

“Whenever any faculty member, or group of faculty members, decides that we are going to do anything that could appear faintly critical of the chancellor, the Board of Trustees or the Board of Governors, we ask ourselves, do we need to hire a lawyer? And what is she or what is the board going to do in retaliation? That says a lot about the environment that she creates … She’s had six years to become a partner with this community. And all of the so-called conversations and listening sessions and programs that she holds have clearly not done that. She has not created a partnership with this community. And so I think it’s up to faculty who care about the community to do that.”

An environment of retaliation.

I know faculty members who are visibly squeamish about any show of political thought -- even bumperstickers on their cars, or receiving email from hell-raisers like me. They often express outright fear that the administration will notice and come down on them. While well known members of the Board of Trustees feel perfectly free to strut their political stuff.
Posted by J.W. Williamson at 11/04/2021 12:01:00 PM
Email ThisBlogThis!Share to TwitterShare to FacebookShare to Pinterest
Labels: Appalachian State University, Sheri Everts, Town of Boone

I have known Megan for many years. I marvel at how someone with thin to no academic or applicable professional credentials ascends so rapidly from working at the university print shop to Associate Vice Chancellor and Director of Communications. An astounding trajectory. I guess it's not what you know but who you know.