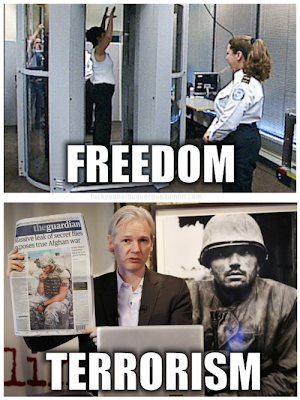 Bush?! Yeah, in December 2009 Bush decided to roll out the scanners nationwide. That, of course, was after Bush decided to add hundreds of millions of dollars to the 2009 Stimulus Bill so the TSA could buy the stupid things. Bush's appointee Janet Neapolitano said that travelers should be patient with invasive security checks and report any suspicious activity.

Because if this happened on Obama's watch and Democrats that protested for years about civil liberties under Bush aren't out picketing right now they're hypocrites, right? But we know that can't be true because only right-wingers are hypocrites.

Rubashov, Comrade,
Nobody said the name Bush here, though these bad policies of Obama -- yes, Him -- are (underscore are) a continuation of Bush policies, and a frickin extension of them.

I don't see anybody out protesting in the snow right now. Nobody.

Henery says "Nobody said the name Bush here". Henery, then how come one of the labels is "Bush administration domestic spying."