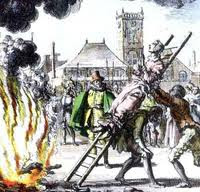 A headline on the ConservativeNC website caught a reader's attention (hattip: GAW):

Christianity is alive and well in Union County, NC

It's an article about the swearing in of three new county commissioners in Monroe, NC. It doesn't say exactly what went on at the swearing in, or what was said, but it does document this:

"...Christian values run deep in these 3 families. Union County's residents and visitors witnessed one of the most respectful 'Christian' expressions in local government of my entire lifetime....

I posted this before, but it is worth putting forward again:
"No man complains of his neighbor for ill management of his affairs, for an error in sowing his land or marrying his daughter, for consuming his substance in taverns.... In all these he has liberty; but if he does not frequent the church, or then conform in ceremonies, there is an immediate uproar."
-- Thomas Jefferson, Notes on the State of Virginia, 1781-82

All national institutions of churches, whether Jewish, Christian or Turkish, appear to me no other than human inventions, set up to terrify and enslave mankind, and monopolize power and profit.
Thomas Paine

We need more Christianity in Politics, not the other way around.

More christianity, Oscar? Let's get the opinion of someone a few IQ points higher than you:
"During almost fifteen centuries has the legal establishment of Christianity been on trial. What has been its fruits? More or less, in all places, pride and indolence in the clergy; ignorance and servility in the laity; in both, bigotry, and persecution."
"In no instance have . . . the churches been guardians of the liberties of the people."
"Religious bondage shackles and debilitates the mind and unfits it for every noble enterprise."
-James Madison, American president and political theorist (1751-1836)

"In no instance have . . . the churches been guardians of the liberties of the people."
"Religious bondage shackles and debilitates the mind and unfits it for every noble enterprise."

OUCH!!! That one must have hurt.

No More and Truth, is that the best you can do? If you can find ONE minister in 2,000 years I think that proves Mr. Madison's point and, on his behalf, I rest his case you dolts.

Shyster, if you would go to church with an objective mind, you would realize most ministers fit this criteria. However, sense you have already told us about your prejudice against religion, this is probably impossible for your bigoted mind.

Lets choose someone more from your end of things. What do you think of Jesse Jackson?

Sorry, do you believe in Odin, Zeus, Thor, Loki, Gnesh or Shiva?