Official Crap and the Real Crap 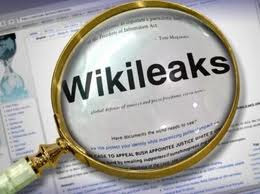 The Wikileaks uproar has been mainly just noise off in the distance to me, but the increasingly frantic attempts by the Obama administration (acting in this instance like "the Communist Party of China," according to David Samuels in The Atlantic) to shut down Wikileaks -- pressuring Amazon to block it from its servers and probably launching a powerful cyber attack on it -- has finally drawn my full attention. When it becomes government policy to eradicate a whistle-blower, I get more curious about that government.

Something's up, that's for sure. Republican Congressman Peter King (NY) wants the Wikileaks founder declared a terrorist threat. Mike Huckabee said that the young pfc who got documents about American foreign/war policy for Wikileaks should be executed. And Wikileaks has done the job that not many journalists -- in fact, none -- have been willing and able to do ... shine the light on the darkest corners of the Obama administration's continuation of the international war machine.

As David Samuels comments, this used to be called "journalism." Now it's considered worthy of the death penalty. The man who launched Wikileaks, Julian Assange, expressed his own contempt for the failure of journalists to do their jobs: "How is it that a team of five people has managed to release to the public more suppressed information, at that level, than the rest of the world press combined?" he told The Sydney Morning Herald. "It's disgraceful."

United States foreign policy is only one target of Wikileaks. We were promised last week a raft of documents showing the behavior of Bank of America and other powerful corporations, a topic that I have a keen interest in and which probably many American citizens might be shocked to learn, but our own government is doing what it can -- and it can do much -- to block us from ever getting that information.

The 250,000 cables that Wikileaks published this month are only a fraction of the 16 million documents that the U.S. government classifies "top secret" every -- every -- year. In a three-part investigative series by Dana Priest and William Arkin published earlier this year in The Washington Post, Priest & Arkin concluded: "The top-secret world the government created in response to the terrorist attacks of Sept. 11, 2001, has become so large, so unwieldy and so secretive, that no one knows how much money it costs, how many people it employs, how many programs exist within it or exactly how many agencies do the same work."

That's a recipe for official mischief. David Samuels: "The result of this classification mania is the division of the public into two distinct groups: those who are privy to the actual conduct of American policy, but are forbidden to write or talk about it, and the uninformed public, which becomes easy prey for the official lies exposed in the Wikileaks documents."

So ... I guess I'm officially skeptical about all the hysterical, top-down trashing of Julian Assange right now.
Posted by J.W. Williamson at 12/05/2010 11:02:00 AM
Email ThisBlogThis!Share to TwitterShare to FacebookShare to Pinterest
Labels: Julian Assange, Wikileaks

Thanks for posting JW. I've been taking on the Tea Party Mob over on the Conservative site who just a few weeks ago were concerned about excessive government power, Media complicity with the government and death panels.

They now want the United States government to send a drone after Wikileaks for practicing freedom of the press and free speech. They want a real death panel to decide Julian Assange's fate.

These people who say they're pro life look for opportunities to execute fellow citizens.

I'm sure PFC Manning broke some military laws and will have to spend some time in prison but the death penalty? Treason?

This is a man who had the moral courage to force many Americans and the world to look at the reality of the Wars we've engaged in for nine years and what the decision makers are really saying.

Politicians believe the flag should only be used to hide behind not actually represent freedom practiced.

This whole Wikileaks thing is nothing but the US government's attempt to shut down the Internet. And both libs. and conserves. have taken the bait lock, stock, and barrel!

The problem needs to be addressed by the trial and execution of the Traitorous PFC. I guess the owner of the webb site could also be charged with espionage.

Address the problem, not the internet.

How is exposing evil and criminal behavior traitorous? I just hope that one day, like Argentina and Chili, we will prosecute our war criminals and torturers.

A classic government phys. opt. The pentagon, in conjunction with the CIA, only leaked through Assange (a Mossad agent) what they wanted to leak, using Manning as the fall guy.

Why WikiLeaks doesn't add up

Your link quotes Alexander Cockburn, son of Claud Cockburn, as someone whose opinion should count to people other than dedicated Communists. Laughable.

Mike D.
And I suppose you agree with Wolf Blitzer and disagree with Cockburn when he wrote that "Blitzer demanded that the US government take the necessary steps to make certain that journalists and the American people never again find out what their government is up to."

Why is the quote laughable? Most of the people on this blog act like they are dedicated communists.

"Most of the people on this blog act like they are dedicated communists."

We have real thinkers on the conservative side who want to devide Americans into two camps.

Camp one: The know nothing, racist, flat earthers, ulgy Americans, flag waving who love the word Freedom as long as it's not practiced.
This camp supports all wars, supports all defense spending,supports torture, Wants drones to attack those who expose the truth, supports all tax cuts for the rich but wants a balanced budget?

So whenever we want to smear someone without providing any reason or evidence, all we have to do is point and say" Communist!" That single word in itself needs no justification or explanation. It's like back in the days when all you had to do was call someone a witch and they would die.

Here's another one for you, Mike D. No quote from one of those horrible "communists":
Live with the Wikileak world or shut down the Net

I believe we are witnesses to an early battle of the Information Wars.

Freedom of press does not protect or apply to bribery, coercion, or use of illegal means to obtain information. Attempting to buy or publish classified information that is detrimental to national security and the well being of our servicemen and women should be stopped at all cost. This is not an issue of freedom of the press or speech, but one of treason and theft.

" the well being of our servicemen and women should be stopped at all cost."

You don't want to know the truth as to why they're being put into harms way or the corruption they defend?


Do you know of any deaths caused by wikileaks?

At what point do you expect powerful decision makers be they Beauracrats, politicians, Corporate Royalty, or Generals to voluntarily confess to incompetence, corruption, crimes, fraud or pettiness?

Truth is a dangerous thing.

So what is the difference between exposing corruption and treason? I think the person so accused must be in the service of a foreign power or government.

it is my opinion that exposing correspondence between allies does give an enemy information that would be detrimental to our troops. I cannot say there have been deaths but it does not take a great deal of critical thinking to realize tipping your cards will not help any efforts we are making. That said, i do not support our policing of the world but i still pull for the home team.