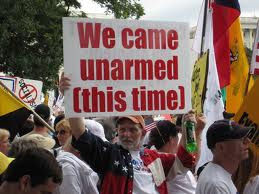 Frank on a comment thread below wants to know where the Tea Party went in the face of their Republican leaders' proposing to add almost another trillion to the national debt with their hostage deal to keep the millionaires' tax break while adding even more to the deficit through the mechanism of estate taxes.

This is where the Tea Party went:

1. Under the wheels of the Good Ole Boy Republican bus.
Congressman Hal Rogers (R-Ky.), the so-called "Prince of Pork," is elected by the majority of old-school Republicans to be Chair of the Appropriations Committee. Rogers is best known for the heaps of Federal dollars he's been able to cart off (in some cases, literally for his own family) as one of the Republican "appropriators" with a big appetite, He's talented: Rogers secured 137 earmarks worth $251.9 million between 2008 and 2010. Now of course he wants everyone to know that he's a reformed alcoholic.

2. To School, Learning How to Snag Lobbyist Money for themselves.
At least 13 new Tea Party Republican members of Congress got to Washington, sniffed the morning air, and promptly hired known and experienced corporate lobbyists as their chiefs of staff. It's good to know where the money is and how to get it! According to reporting in the WashPost, freshmen Tea Party Republicans have already ingratiated themselves into the cocktail culture of K Street. Dozens of freshmen Republicans have crowded into near-daily fundraisers, parties, and high-priced dinners hosted by corporate lobbyists ... because, evidently, close adherence to the Constitution demands it!

But to update Frank on the Tea Party response to the Obama/Republican Senate deal on the tax cuts, at least one Tea Party group -- the largest one, actually, the Tea Party Patriots -- sent out an e-mail call for action for their members to oppose the bill (according to Evan McMorris-Santoro). Their reasons for opposing the bill seems to rest heaviest on the provision giving extended unemployment benefits to those lazy no-good workers who were unwise enough to lose their jobs, but still.

The bottomline message, then, appears to be ... more money for Tea Partiers, OKAY FINE. More money for anybody else, BOO HISS.

And that's why they cherish the Constitution.

RIGHT! I want to know where the Tea Party Deficit hawks are now? Where's the outrage? According to CNN:

" The Congressional Budget Office released its score Friday on the tax plan hammered out between Republicans and President Barack Obama, showing a $893 billion hit on the deficit over the next five years.

The bulk of the deficit increase comes from loss of revenue -- $756 billion -- with the rest coming from additional direct outlays.

The 13-month extension of unemployment benefits adds less than $57 billion to the deficit.

The highest price item is the extension of the Bush-era tax cuts, which will add more than $400 billion to the deficit, followed by the payroll tax holiday at about $225 billion."

The Tea Party is obviously a crock. Otherwise, they'd be picketing by now. Suckers.

I doubledog dare someone from the Tea Party to post here explaining why the Tea Party isn't in the streets over this "compromise" tax cut that will increase the budget by almost $1 trillion dollars--all unpaid, borrowed money.

Um, because it's freezing outside and just going to get colder?

Seriously, though, if you want an answer from a genuine Tea Partier, here's one.

1) There IS outrage. Aside from the email cited in the OP, I posted some cites while commenting on an earlier post so I won't repeat it here, but TPers have always been skeptical of the GOP (remember who defeated Bennett? Castle? Rubin?). I would say that the Senate's refusal to ban earmarks, along with Hal Rogers' victory, seems to have caused more anxiety, in that at least the tax deal was the product of a compromise with a Democrat, so the GOP isn't completely at fault. So why aren't TPers out protesting, right? Two reasons.

2) Time. Look, Nancy Pelosi is still the Speaker of the House! We're not going to jump ship on these people before they even take office, for goodness sake. The tax bill is a bad sign, but our hope is that the Republican House next year will cut spending to match the cuts. Will it happen? I'd say the only hope is that the institutional changes Boehner wants to make (divide appropriations bills, more appropriations transparency, ban earmarks, etc) will make it more difficult to increase spending, so the budget will decrease as a percent of GDP (really, are your blinders on so tight that you think we didn't understand the risk 2010 Republicans would be just as profligate as the 2000-2006 Republicans were?!). If they haven't learned anything since 2006 we'll get mad and vote them out too in 2012. [shrug] We don't have to vote Democrat, all we have to do is stay home and the GOP goes down in flames in 2012.

3) And what about YOU? In just two years, Obama has escalated the war in Afghanistan, escalated the illegal drone strikes in Pakistan, ordered the assassination of an American citizen in Yemen without trial, continued rendition of terror suspects to countries that practice torture, increased federal wiretap powers, announced that some prisoners at Guantanamo will stay in prison even if a court finds them not guilty, refused to move aggressively on DADT. He's George W with a suntan! What happened to all that "fierce moral urgency," huh?

Well, you think Republicans would be worse, duh. So maybe you talk to your friends how you don't like the tax deal or Afghanistan, but you don't picket the White House like you did when Bush was in office. In fact, I'd bet that as you read my list of Obama's "accomplishments,"some part of your brain was coming up with rationalizations for why it's okay for Obama to have done those things--but you wouldn't have if John McCain had done the exact same thing.

Guess what..we're just like you. We think Democrats would be worse. So we grumble to our friends but we don't picket like we did when the Democrats were in charge.

There's nothing wrong with that. Partisan Identification is a perfectly logical response to limits on human cognition, and it happens on BOTH sides of the aisle.

So try losing the attitude; TPers are people like you. Pundits on the right have spent the last year laughing at you for being suckers and believing Obama's campaign rhetoric. It sounds bad when they do it, and it sounds just as bad when you do it.

Thanks, Rubashov, for weighing in. But don't come crawling up my ass. I am a progressive Demcrat who is pissed as hell about the tax compromise (in part because of the $1 trillion it will add to the deficit). And, trust me, I am raising hell about it every single day. Been watching the news about the Democratic revolt? I'm a part of that.

But you explain you want to wait to raise hell until you have the people you want in office. That sounds like BS to me. If the Tea Party is so opposed to high deficits, why aren't you out there protesting instead of quietly letting this go through? Because you want to wait? I know what that means. I believe the Tea Party actually WANTS this bill to go through because the bill gives huge money to their financers AND opens the door to cutting Social Security and Medicare.

Again, your explanation doesn't hold water. If you're against the tax compromise, why not issue a press release that says so? Why not get back in the streets? Why not make some calls instead of just claiming to be against the bill while sitting back smoking a stogie?

Anyone can kick and scream when they've lost the majorities, which is what we saw from the Tea Party. Those people blindly supported all the attempts by the Republicans to destroy the Constitution during the Bush years, as well as saying nothing about the deficit exploding policies that did nothing but destroy the economy and further enrich the wealthy. Their "complaints" only surfaced when they experienced losses at the ballot box, making them more opportunists than genuine. The fact that the Democratic population has been willing to risk losses of their majorities by voicing objection to unpopular policies passed while in the majority is a trait to be proud of verses our lockstep Republican counterparts. While it is painful, we should be proud.

Maybe it is because members of the Tea Party want the tax cuts to stimulate the economy. More revenue has historically been the result of tax cuts. The problem is not revenue. It is big government spending.

Tax cuts plus spending cuts equal prosperity for everyone.