Net Neutrality Is at Stake 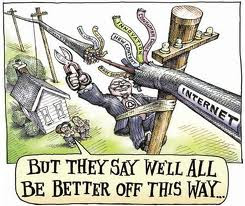 Today the Federal Communications Commission will vote on a new draft "order" (that has not been made fully public) about which all of us should be concerned. The two Republican members of the FCC say they'll vote against the new order, which according to in-the-know commentators will for the first time set up "online discrimination" aimed at privileging certain big corps like AT&T. I believe those Republican commissioners are correct in their votes. The Democratic commissioners, including Obama's appointed chair, appear to be wrong. Very wrong. (The technicalities are complicated, so you'd better be fully awake and focused before you start boning up on the issue.)

What is Net Neutrality? If you don't already know, the concept advocates for no restrictions by Internet service providers and governments on content, sites, platforms, the kinds of equipment that may be attached, and the modes of communication.

We view with alarm anything that threatens that principle. The new order proposed by the FCC chair appears to do that very thing.

In Congress, only Sen. Al Franken has been outspoken on the issue, and you might want to take a look at the warning he sends.

Because the basis for this threat appears to be another sell-out by President Obama, it is all the more credible.

UPDATE
The FCC passed its new "order" by a 3-2 vote (here's an assessment, for what it's worth), but this sentence leaps out at us:

The commission's order is rumored to be 90 pages or so long, but there's no public copy available as of yet.

He has an ulterior motive. said...

Yes this is a bad bill, but you have to wonder if Williamson opposes it because it might make him stop censoring comments on this blog.

Wonder what Shyster thinks of it?

To Ulterior: No evidence of censorship here. Go bark up another tree.

It's not s bill. It's a regulatory ruling. Simply another governmental decision in favor of the rich and powerful.

Amused at the posts. said...

I did not know Williamson was Rich and Powerful. Oh well....

Of course there is no evidence of censorship. It has been censored. Duhh.....