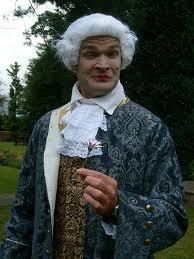 Just yesterday we saw where Tea Party Nation President Judson Phillips said (on a Tea Party radio show) that it "makes a lot of sense" to go back to the practices of "the founders" of the nation, particularly one they enforced allowing only property owners to vote (only white property owners, actually, but Mr. Phillips didn't push it quite that far). In other words...

Renters, this Bud's NOT for you! (Also, we assume just naturally that the grown children of millionaire property-owners would also be disenfranchised, since technically they are hanging their clothes in closets owned by their parents. Or would the tea partiers make an exception in their case?)

Anyway, that clarified a lot about what at least some in the Tea Party mean by taking our country back to 18th century values.

Then this a.m. we see the report on the new Republican freshmen in the 112th Congress (most of them either professed tea partiers or tea party lite), that nearly a quarter of them are already millionaires ... soon to get wealthier (Virginia Foxx has shown the way to take a modest fortune and make it much, much larger by six years of "public service").

Add the Tea Party movement to repeal the 17th Amendment, which established the popular election of Senators, who previously had been chosen by the state legislatures, and there's another attack on the idea of us wig-less types actually voting for stuff.

There's a pattern here involving money and privilege, but I'm not ... quite ... sure ... if I can make it out.
Posted by J.W. Williamson at 12/01/2010 08:46:00 AM
Email ThisBlogThis!Share to TwitterShare to FacebookShare to Pinterest
Labels: teabag protest, Virginia Foxx

repealing the 17th doesn't mean that direct elections would be eliminated. If the 17th was repealed it would then be up to the individual state to decide whether it wanted direct or indirect method. There is nothing in the US Constitution that said "how" the Senate would be chosen.

The purpose of repealing the 17th is to restore oversight of the national government through the federal government by the state governments.

With a $1.7 trillion debt do you think it's time for some oversight or do you think the teenage girls who have limitless credit cards in the Congress should just keep spending our money?