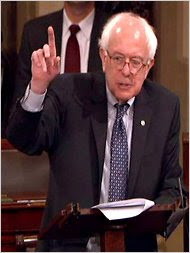 ...Senator Bernie Sanders (I-Vt.), who talked for nearly nine hours on the floor of the Senate Friday against the Obama administration's decision to continue the Bush era tax cuts to millionaires -- and make them worse.

By Friday night, Sen. Sanders was at the top of Twitter's "trending topics," the true mark of post-modern buzz.

What did Sen. Sanders say?

"You can call what I am doing today anything you want. You can call it a filibuster. You can call it a very long speech. I am not here to set any great records or to make a spectacle. I am simply here today to take as long as I can to explain to the American people the fact that we have got to do a lot better than this agreement provides....

[The top 1 percent say...] " 'How can I get by on one house? I need five houses, ten houses! I need three jet planes to take me all over the world! Sorry, American people. We've got the money, we've got the power, we've got the lobbyists here and on Wall Street. Tough luck. That's the world, get used to it.' Rich get richer. Middle class shrinks....

"It has been a very long day. I do believe that if the American people stand up … I think we can defeat this proposal. I think we can come up with a better proposal which better reflects the needs of the middle class."
Posted by J.W. Williamson at 12/12/2010 10:04:00 AM
Email ThisBlogThis!Share to TwitterShare to FacebookShare to Pinterest
Labels: Bernie Sanders, federal taxes

I love this guy.

He's a mensch! Compared to most other Dem Senators, he's a model of honest advocacy. I don't believe Bernie Sanders can be bought.

Henery, nice try trying to give the Dems the credit, but Sanders is an independent.

Gosh, No Compromise, I'm so pleased to have you watching out over the Democratic brand. Of course I know that Bernie is not a registered Democrat, but he's actually more democratic than many of our Democrats. Which is the point I was trying to make. And which I suspect you understood. You were just looking for ANYTHING to find objection to.

Yep. Good ole Socialist Bernie....a hero to the watchers! What can be more democratic than a Socialist, right?

At least it brings out the truth from some of you.

lefty motto "tax the other guy and spend the money on us!"

Good luck with that!

Righty Philosophy:
I want government to provide me with goods and services WHILE I get to keep ALL my money. Screw everyone else!
Let the peons pay!

Nice try, Henery, trying to cover up your lack of knowledge. But when you say something like, "Compared to most other Dem Senators, he's a model of honest advocacy" makes me believe that you believe that he is a Dem.

No Compromise,
Personally, I'm glad you're not in charge of a drawbridge, cause you'd drop it only after the knights were in the moat. You are sooo dumb.

Henery, you must be a college professor--believing you're always right and never wrong.

No Compromise,
Is that your gig? Feeling resentment toward anyone more educated than you?

To answer your question, no, not a college professor, though I tried to teach school once upon a time. I would have loved a college job, but I didn't have enough education. At least I'm able to admit it.

Henery, I see you're using the ol' "If you can't argue with logic, then resort to personal attacks."

Henery said, "but I didn't have enough education. At least I'm able to admit it." FYI, Henery, I have a master's degree, and was accepted to a Ph.D. program with a full scholarship, but turned it down, and never regretted it. Somehow, I don't think that qualifies me as having an inferiority complex.