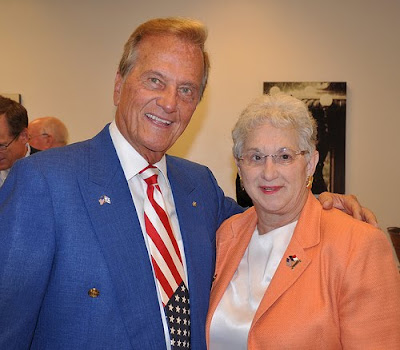 Virginia Foxx, posing with Pat Boone in the Capitol this morning.

Pat Boone ... who this year described "homosexual activists" protesting Proposition 8 in California as "sexual jihadists" every bit as dangerous as the Muslim extremists who killed people indiscriminantly in Mumbai.

Pat Boone ... who campaigned for Republican Ernie Fletcher in the 2007 Kentucky gubernatorial election by charging that Democratic candidate Steve Beshear would support "every homosexual cause" -- "Now do you want a governor who'd like Kentucky to be another San Francisco?"

[What is it they say about these aging male beauty queens with an anti-gay fetish? Oh, yeah, right!]

This is the sort of celeb that Virginia Foxx can match, quote for quote.
Posted by J.W. Williamson at 7/15/2010 06:43:00 PM
Email ThisBlogThis!Share to TwitterShare to FacebookShare to Pinterest
Labels: Pat Boone, Virginia Foxx

After reviewing Pat's pic with the Fox! Their is no doubt that Pat is Gay and the Fox is a over the hill Lisbo biker Queen

Years ago when i was a teenager, I worked in a big seafood rest. on the beach in Florida. We made tons of money from tourists. One night Pat Boone came with about 35 people in his family and took up an entire section in the rest. & sat there for three hours. When they all finally left, he left a $25.00 tip for all of them (hundreds of dollars worth of food). The waitress lost out on $300 or $400 with all the tables they took up and how long they stayed.

She has that same goofy grin that she had when she was weak in the knees girly over Roger Clemens or when she tried to kiss G.W. Bush on the mouth. Ugh.

She has that same goofy grin that she had when she was weak in the knees girly over Roger Clemens or when she tried to kiss G.W. Bush on the mouth. Ugh.