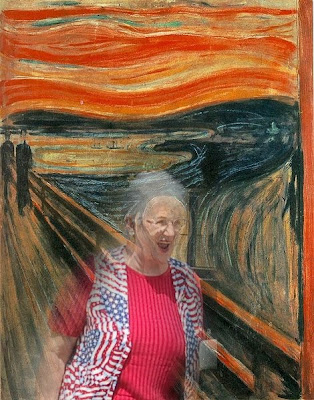 Posted by J.W. Williamson at 7/06/2010 09:13:00 AM
Email ThisBlogThis!Share to TwitterShare to FacebookShare to Pinterest
Labels: homophobia, Virginia Foxx

can we have a photoshop contest? best uses of LO's photo?

1) Why were you fired from ASU? And what happened to the "other guy?"

2) In the past, weren't you a liberal feminist? And if so, what happened?

3) How many times were you arrested for shoplifting?

4) How many illegal aliens have you employed at your business?

If only someone in the media had some guts!

1. The "other guy" spent the rest of his ASU tenure in ridicule and disgrace. Upper level responsibilities disappeared. Now deceased.
2. ??? Always been mean.
3. Don't know of any arrests, but she was banned from old Winn-Dixie and Belk. Only know this because of employees who were involved.
4. Only one known for sure is the guy who wrecked a business truck.

Thanks, "Know Half". Have heard these answers from a variety of sources. The real question remains. "Why does she continue to (mis)represent the 5th?"

I think it should be fairly obvious that she gets reelected by saying what her constituents want to hear.

It is difficult for many who live protected behind the ivy covered halls of academia to believe, but the truth is that in the outside world, Marx, Mao, and Che are not known for the beauty of their perfect Utopian vision. If they are known at all, they are known as ruthless thugs, oppressors, slit-throat, authoritarian killers.

Please forgive the ignorant people for not feeling the beautiful inner light that the superior among us live every day as disciples of 'social justice'.

Sorry, BikerBard. People are not as stupid as you wish them to be.

I am not a fan of Virginia Foxx either, but I am not going to sit here, scratching my head in confusion that she continues to get reelected when there is a simple, obvious, logical explanation.

Try getting your candidate to support the beliefs of his constituents, and you will have a chance to take Foxx down. Otherwise, get used to wallowing in your own disbelief.


"The Negro is indolent and spends his money on frivolities and booze, whereas the European is forward-looking, organized and intelligent" - Che Guevara

The butter has officially slipped off Mike D.'s noodles.

The substance, Mike, is that your post was ridiculous. My question was rhetorical, a lament, if you will. However, you still have a burr up your ass about educators. Sad. Not all of us can schedule a buffet.

"The real question remains. "Why does she continue to (mis)represent the 5th?"" - BikerBard

Like it or not, my answer is an accurate representation of reality. I know you don't support Foxx, and I don't either, but there is a real reason why she gets reelected, and you guys have the choice to either 1) understand it, or 2) make yourselves feel comfortable with her perpetual reelection by debasing those who vote for her and villanizing her to a degree where you can live with her as a bogeyman who is real to you, but not to the majority of the voters in her(your) district.

But if this blog ridicules her as someone who laughs about gay pride events right after a contributor to the blog makes an unchallenged lesbian joke (well, challenged only by Mike D.), then you must understand that she will continue to get reelected.

If you want to beat her, you are going to have to think outside your partisan paradigm.

Why don't you recruit me to run against her? I would do more than stand in front of the crowd for 90 seconds and say "Virginia Foxx is bad".

Sadly, BRockBlue's and your responses tell me that my words fall, not only on ears that are muffed, but on eyes that are carefully shielded from reality.

"Up your nose with a rubber hose!"
-Vinny Barbarino "Welcome Back, Kotter."