Why Is This Man Laughing? 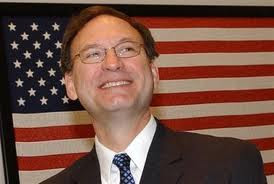 Why? Because it's Samuel Alito, and it's HIS Supreme Court, bitch!

When Alito replaced Sandra Day O'Connor on the Court in 2006, he shifted the Supremes decisively to the right. Analysis by Adam Liptak shows that the Alito court has issued more pro-big business, more pro-Big Brother decisions at a rate unmatched since 1953.

Who remembers now that Alito was George W. Bush's second choice, after Harriet Miers crashed and burned, or rather after she got chucked on the funeral pyre by Bush's conservative puppet-masters?

Liptak points to a couple of key Alito-in-the-majority decisions that specifically trashed earlier precedents set by Sandra Day O'Connor: Citizens United v. FEC, which sold our elections system to the highest bidder; and Hudson v. Michigan, which ruled that armed agents of the government can storm your house, seize whatever evidence they find of anything, and use that evidence in court against you. The Hudson v. Michigan ruling strikes directly at the Fourth Amendment, which used to protect citizens against unreasonable searches and seizures.

Feeling his oats, Samuel Alito is. He's the dude who mouthed the words "not true" when President Obama dared criticize the Citizens United decision in his State of the Union address.

Alito was entirely correct to call out Obama on his lie as was Wilson.

This "anonymous" poster is really sad. He or she constantly takes the other side but never provides a name.

In fact, Obama simply told one possible outcome about the case. Maybe Alito disagreed, which is fine. But he is the one who looked foolish on national TV.

And of course Joe Wilson wouldn't know the truth if it bit him on his ...