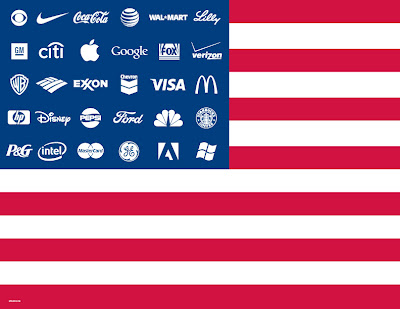 Happy times ahead for democracy in North Carolina! This, a baneful bellwether, from "Under the Dome":

One of the last bills the legislature may tackle this session is the state's response to the U.S. Supreme Court decision in the Citizens United case.

The bill would strike the lines in state law that prohibit election expenditures by corporations and establishes disclosure and reporting rules for fundraising and expenses in those cases.

Sample "disclosure" under the Supreme Court's unleashing of Big Business: "This government brought to you by MobilExxonUPSWalmart. Just lie back and relax!"
Posted by J.W. Williamson at 7/09/2010 09:01:00 AM
Email ThisBlogThis!Share to TwitterShare to FacebookShare to Pinterest
Labels: corporate power

This would make much more sense to me, J.W., if you were constantly advocating smaller, less powerful government.

I am not sure why you struggle to achieve one of these scenarios while struggling against the other, when they are the same thing.

Do the American people need to teach you about the third option?

A 54-year-old woman told police that a man exposed himself to her Wednesday while standing in a checkout line at the Dorman Centre Walmart.


The woman claims that around 12:15 p.m. Wednesday she was in line at the register in the store’s garden center. A white male about 45 to 55 years old was standing in front of her wearing a white tank top and very short gray shorts. An incident report states the man kept pulling up his shorts and exposing his private parts in front of her. The man then exited the store from the garden center, the woman told police.

The report states the suspect was observed on surveillance video entering the store through the garden center, proceeding to the lawn area and staying less than five minutes before paying for his merchandise.

The man didn’t approach anyone else, the report continues, but the video does reveal the suspect continually pulling his pants up. It also appears to show the man dropping something and bending over in front of the victim to pick it up. However Authorities got a break in the case when it show the man wearing a Tea Party Jock Stap with these words on it.." Sara Palin In 2012 and Drill Baby! Drill!"

Authorities are reviewing the video.

Mike, What makes you think a large country with all our global interactions can survive with a small relatively powerless government? I compare our society to a large organism with complex behavior. No such animal can survive without a large control center, eg -brain. Large complex organisms require large brains to regulate vital functions, impose checks and balances, and plan for the future. It is clear to me that any complex society requires considerable cooperation and regulation of individual behavior to sustain itself. The question is will we regulate ourselves via elected representatives for the general welfare, will we allow profit-seeking corporate entities to fill the power vacuum and take us back to a medieval power structure, or will we be overcome by another society that does coordinate and cooperate effectively.
Please give me an example from history or modern times of a large complex society with a small powerless government.

1.No, it is government by Harry Reid, Nancy Pelosi, and Barack Obama ... pushing their personal agenda ... hey folks enough is enough ... stand up for this country.

2.Stop handing me the crap on Walmart. All of you rip it apart and then in their going after the specials.

2.Stop handing me the crap on Walmart. All of you rip it apart and then in their going after the specials.* Secret Republican Chinese Fascist Corporate Backer

LOL..... I wager you think Goldman Sachs and the Federal Reserve System is doing God work on this planet!

Hey Anonymous:
A little less time on the computer and more time learning basic English grammar, would help you tremendously!